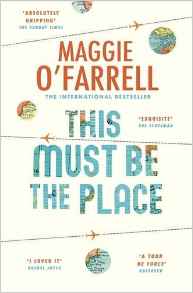 “[Claudette] doesn’t see a room, an alcove, a piece of flooring: she sees a work in progress, just waiting to be embarked upon.” This Must Be The Place.

If there is one thing Maggie O’Farrell’s loyal readers expect, it’s a good disappearance. In this respect, her Costa short-listed This Must Be The Place follows in the footsteps of two of her earlier novels, The Vanishing Act of Esme Lennox (2007) and Instructions for a Heatwave (2013). The anchor characters, Daniel Sullivan, an academic linguist, and his wife, Claudette Wells, an unwilling but famous actress on the cinematic world stage, always manage to manoeuvre themselves into invisibility at crucial moments in their lives. Beginning in Donegal and proceeding via Cumbria, Brooklyn, the Scottish Borders, Berkeley, Sussex, Goa and Devon, the narrative moves across countries and continents, and in and out of decades. We follow the stories of not only of the unlikely marriage between the academic Daniel and the outrageous, beautiful and unpredictable Claudette, but also those of a host of characters who are, or have been, in some way important in their lives. These also include their children, their parents and siblings and old friends, as well as some encountered by chance on the way: Ari, Claudette’s son by an earlier relationship, Marithe, her daughter, Niall and Phoebe, Daniel’s American children by his first marriage, Todd, the disappearing friend, a hated father in Brooklyn, Rosalind, the chance encounter on the Bolivian plains…the list goes on.

Daniel is haunted by a guilty secret, and a ghost from his past reappears when he decides to visit his father in America. The glamorous and eccentric Nicola Janks, a fellow academic, had arrived in his life as unexpectedly as she had disappeared a quarter of a century ago. But what happened to her, and was Daniel (who had made himself scarce at the critical moment) responsible? Equally, Claudette bears the scars of a long-gone relationship with the priapic and athletic Swedish film producer,Timou. But where do the ghosts belong in their lives? Claudette’s definitive flight from Timou sees her living a reclusive family life with Daniel in the hills of Cumbria, lost to the world. The real question is, is this where they are meant to be? Is the weight of the past too great for their own story? Have they come to the end?

In this long book (500 pages) O’Farrell’s gift for holding together the narrative is tested to the limits. The point of view changes from chapter to chapter: the first page begins: “There is a man and the man is me” and subsequent sections are in the second and third person. Occasionally redirecting the narrative into the future, she offers snippets of information in dramatic-ironic mode (“Daniel does not know that his daughter, Phoebe, will be killed in a road accident”). In less deft hands the constant movement of focus from one place to another and from one point of view to another could easily trip up the inattentive reader, but O’Farrell is willing to take that risk and is pre-eminently able to lead the way through the maze of this narrative.

I enjoyed this book. Could it have been shorter? Possibly, but, full of the intimate details of the lives of her characters, it was never a matter of wondering when the end was coming. I remain uncertain about the purpose of the chapter devoted to an auctioneer’s catalogue of photographs of an eclectic collection of items which had belonged to the disappeared Claudette. Perhaps it was intended to highlight the true eccentricities of their erstwhile owner. Observant, sympathetic and insightful, O’Farrell is a master of characterisation- and of putting the jigsaw together in a totally believable way. Yet what I feel is lacking in this novel is a profound sense of place, its importance in the narrative and also to the development of the characters themselves.