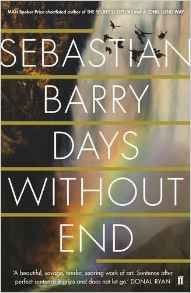 In recent years, Sebastian Barry’s literary career has had tremendous world-wide recognition and success. The list of awards and nominations his works has garnered seems endless. From The Steward of Christendom (1995) which won him The Christopher Ewart-Biggs Memorial Prize, through A Long Long Way (2005) (Man Booker Prize shortlisted), to one of his most celebrated works, The Secret Scripture (2008), (James Tait Black Memorial Prize and 2008 Costa Book of the Year). It seems Barry has already fixed his name in the Irish literary canon, becoming one of Ireland’s fíneálta. It is no surprise that his latest novel, Days Without End (2016), is nominated for the Costa Book Prize 2016.

The novel’s setting occupies the late 19th century in America during the Indian Wars and, eventually, the Civil War. The main protagonist of Irish decent, Thomas McNulty, who is also the narrator of the story, reveals the army’s harsh world of violence and brutality. Aged only thirteen, Thomas emigrates to America and, at seventeen, volunteers as a soldier in Missouri, where he meets the other central character in the novel, John Cole, who immediately becomes a defining figure in his personal life. “I loved my father when I was a human person formerly. Then he died and I was hungry and then the ship. Then nothing. Then America. Then John Cole. John Cole was my love, all my love.” Sentences like this one, with their narrative gaps and carrying silences, encapsulating history and individual anxiety, become Barry’s trademark style in the novel.

Days Without End’s chronological narrative is fulsome and picturesque in its descriptions of the atrocities these two characters are forced to carry out or endure as soldiers. “I stabbed and I stabbed. I saw John Cole stabbing, I heard him grunting and cursing…The smoke cleared and we saw at last something of our battlefield. Then my heart shrank in its nest of ribs. It was just women and children all around us.” Often, Barry’s evocative and vivid language creates a stark contrast between the beautiful natural imagery and the dreadfulness of the war. “But now in the far distance we see a land begin to be suggested as if maybe a man was out there painting it with a huge brush … God’s work! … A vicious ruined class of man could cry at such scenes because it seems to tell him that his life is not approved.”

The relationship between the characters, and especially with the appearance of Winona, an eight-year old Indian girl taken under the care of Thomas and John, shows an unorthodoxy unusual for those times, which distinguishes Days Without End from most historical fictions. The occasions where the male characters dress as females and dance in front of the “starved” miners seems to mark the best of their times and proffer a peaceful break from the hostilities on the battlefield. However, as Winona grows up, the persistent questions of ethnic and national identity dig deep into their private worlds and keep them constantly alert. Simultaneously, within the bigger framework of the novel, new war is stirring up between the North and the South which, ultimately, brings the characters to the frontline again to experience yet another wave of brutality.

Sabastian Barry’s new novel captures all those scenarios with impeccable brilliance and ease. Although the flow of speech is almost mechanical, lacklustre, and, at times, monotonous, reminding the reader of the continuous, ceaseless flow of rivers, it also epitomizes the life of the characters as soldiers. It seems to me it is this notion of the infinity that defines the title, Days Without End: “Time was not something then we thought of as an item that possessed an ending, but something that would go on forever, all rested and stopped in that moment … You look back at all the endless years when you never had that though … I am thinking of the days without end of my life.”