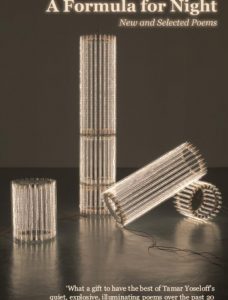 portraits are for the dead.

In these lines, Tamar Yoseloff voices Jackson Pollock as part of a remarkable narrative sequence, but such is her versatility that it may also speak of her own prolific, multi-faceted output. An American, long resident in London, Yoseloff is particularly powerful in the crossover areas between words and visual art. Working with both artists and galleries, she also “explores the intersection between poetry and visual art in her blog Invective Against Swans”; her finest and most daring work lives in that very intersection.

I confess an initial reservation about A Formula for Night, which spans twenty years, seven published collections and some newer as yet uncollected poems. Grouping poems chronologically under the book of their first outing, often feels an editorial opportunity missed. Rather than a roll call of greatest hits, I’ve tended to want the poems to interact differently in their new setting, the old challenging the new and vice versa. However, while that may be true sometimes, I was wrong here. It would be hard to imagine a better, more informative or revealing structure.

Whilst there is an autobiographical narrative, albeit not in a straightforwardly confessional tone, it is not only in the tracing of the poet’s life that this ordering makes sense. By this shaping, we come to understand her considerable creative development.

The first two sections (Sweetheart, 1988 and Barnard’s Star, 2004) reveal an already assured talent, adept at capturing nuances of place, and particularly time, with pithy and witty cultural references. With an underlying, growing and prescient layer, exploring mortality and questioned immortality, Yoseloff is equally at home framing London at Christmas, Venice’s cemetery island and “The Nolans in Japan”.

However, something really exciting happens from the third section on (Fetch, 2007), and sharpens thereafter. This is the overt beginning of her interface with visual art, reflected not solely thematically or ekphrastically, but as an exchange affecting the very form of her poetry. Here are the first of several prints which are not decorative embellishments, but integral to the construction and tactile crafting of the poems. In Marks, 2007, Yoseloff collaborates in an Artist’s book with Linda Karshan.  These staccato poems play with form, synchronising with the images.

Hold it in your hand
hold it to the light

Something unsettling is happening in this progression.
That is not to say that Yoseloff has abandoned conventional form. Far from it – she is particularly adept with the sonnet, perhaps particularly in the moving series taken from Formerly (2012). Whilst these deal with bereavement, Yoseloff still manages dark humour, “Quickie Heel Bar” has a touch of The World’s Wife in its execution, and many poems deliver the killer, unexpected last word – “The door/ is always  open, he said, leaving.” An earlier, equally powerful sonnet “Voyage”, completes with glorious volta, interlacing the read reality with the lived, in something of the way of Italo Calvino’s writing.

In the final poems, there is a continuing response to widowhood in all its shades and textures and to the close-following death of her mother. These poems may be new, and hewn from the hard face of personal trauma, but they are far from unfettered outpourings. Consider the prose poem “Wing Mirror”, its four section word rearrangement, becoming progressively angrier with controlled use of essentially the same words. Equally taut, “Ruin” moves from a conventional stanzaic form, via two erasure processes to become a spare elegiac piece. Notably, this is also a response to a visual artist’s work. Even in harrowing places, her humour surfaces and the poet enjoys a wicked way with subverting cliché (though occasionally this is overdone, for my taste).

A Formula for Night is a significant journey for both the poet and the reader. Take it.