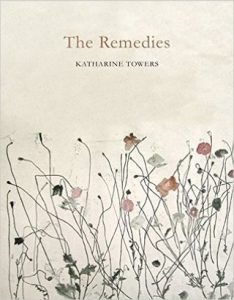 The American transcendentalist Henry David Thoreau wrote, “Nature will bear the closest inspection. She invites us to lay our eye level with her smallest leaf, and take an insect view of its plain”. Katharine Towers’ second poetry collection, The Remedies, is a clarion call to a kind of modern day  transcendentalism. She might not wear a hairshirt or, Walden-like live off the land in the woods, yet, as a poet, she does invite us to consider the lilies, to look at small miracles and moments of extraordinariness that arise from those quiet moments of contemplative introspection.

While flowers predominate, other oft-overlooked aspects and small creatures of the natural world ‒ small birds, clay, grass, woods, frost, leaf and twigs ‒ also inspire poetic musings. Towers’ attentiveness reminds us that these constitute the original creative commons: the “darkness lit by one bird’s/threadbare song”, the cloud in the “ruckled sky”, standing in “the iron and purple of evening”.  Nature provides a spark of the divine but without the learnt bombast of religious discourses. Instead, in “Pilgrim”, we are asked to “think of the mole in his crib of earth… lifting his hands in prayer” and, more humorously, in “Grass”,

going to church
would entail a fervent swishing
through couch and wild oats.

Liturgy can be “vegetal”, and in “Field Oak”  almost chanted:

These moments of beauty and truth inspire a “familiar pain”, an internal wound or ache  that calls out to be filled.

Yet The Remedies also registers a tension between seeing attentively, and projecting individual whimsies and desires. If at times, the nature is a kind of language that can be read,

see how frost enunciates the day ‒
spelling out each grass by name, each leaf and twig,
the petals of its stem of lady’s smock[,]

at other times, the poet is all too keenly aware of the dangers of pathetic fallacy. In “Childhood”, the narrator advises, “We should not be looking so hard//at what a tree would rather keep to itself”; in “Murmurations”, when a cloud of starlings “try out the sky”, where some might see “a freak wave” or “a soul adrift/in the dusk”, she reminds us that “none of this is about us.” Yet Towers’ collection, which ostensibly takes its title from a sequence of poems based on “Flower Remedies” by a Dr Bach where thirty-eight plants or flowers are “imagined to be afflicted with the difficulty” for which they are remedies, does not always take its own admonitions to heart. This sequence of poems in the middle of the collection seems just too sweet and whimsical given the tensile strength yet fine delicacy of tone exhibited elsewhere. For me, the finest writing occurs in the collection’s seemingly autobiographic moments, balancing the imaginative and the real. In the suggestively fabular “The Roses”, a dead father is still asleep, sleeping-beauty like,  in a “wreck of thorns and brick” and roses; in “The Window”, mother and daughter each stand by a window at different times, the former “anxious for a [child’s] homecoming”, and the latter, “catching cold and staring out/ at nothing or at no-one coming home.” These moments of loss give the collection a darker hue, a counterbalance to a sometimes cloying sweetness.

Made up of mostly short poems, some only numbering three lines, The Remedies deals in the fragment, the chance occurrence, the sudden revelation gleaned from Nature and is, like transcendentalism, a reaction against the modern world. Towers’ diction is kept simple deliberately (despite two poems that engage with French translations) and the work’s simplicity belies its crafting. Everywhere there is a pleasing shapeliness in phrasing, in sound clusters, and in lineation used creatively to emphasise:

And I should be
singer of grass, spitting all
but the sweetest pith from my mouth.

The Remedies reinvigorates the lyric; its contemplative attitude provides tonic for modernity’s discontents.