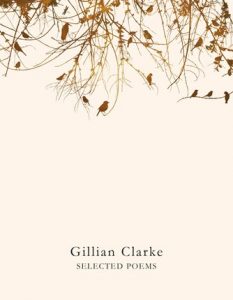 “Shine the torch, count the eyes and divide by two”.  My own mother’s description of checking the sheep always seemed odd to me but Gillian Clarke says much the same thing in her poem “Ark”:

We wake nightly in the early hours, dress for the rain
To count their faces in the flashlight, their glittering eyes.

This is not the only poem in the collection which describes the poet’s assistance in the birth of a farm animal.  Consider “A Difficult Birth, Easter 1998’’ where, Clarke describes a ‘’flood’’ as the lamb is born.  In a latter poem, the Biblical reference is sustained.  The first birth could have been a death (it was not) but the second birth is described in terms of a resurrection:

Then the second lamb slips through her opened door,
The stone rolled away.

as it did for Jesus at Easter.

This poem is not simply about a lamb’s birth, nor even about Easter, but also references the Irish peace process.  Even more, it considers the treatment of women, as well as animals, during childbirth.  Clarke manages all of this is a relatively short poem with no overt opinions expressed.

Not all of Clarke’s poems are about sheep and not all are in free verse. “A Sonnet for Nye”, about the architect of the NHS, Aneurin Bevan, is a sonnet.  From a book containing nearly a hundred poems, it is difficult to pick a favourite but I think this one could easily qualify.  Clarke sums up the magnitude of Bevan’s task and achievement precisely and beautifully in phrases such as ‘‘he hammered stammered words’’ and ‘’preposterous social dream’’.

Aneurin Bevan was, of course, Welsh and Gillian Clarke is the National Poet of Wales yet most of the poems in this collection are nothing like this one.  Like many others in Selected Poems, the last poem in the collection, ‘’The Year’s Midnight’’, is a nature poem and again has those gentle Biblical references.  As in “Ark”, there is mention of the Flood, with the rainbow as a promise, but here the promises are from nature (“each leaf-scar is a bud”) hearlding new life.  However, the ending, (“promises, promises”), suggests some scepticism, wearing, as it does, that phrase’s cynicism.  Perhaps the poem is not as simple as it first appears.

Although most of the poems do not seem to pertain to Wales particularly, Clarke does, however, slip in the odd Welsh word, for example “dwr”, (water) at the end of ‘The Water Diviner”, which she uses to capture the sound of water rumbling.  Confusingly, (to me at least), she uses both “nain” and “mamgu” for grandmother; “nain” is used in North Wales and “mamgu” in South Wales.  These are words which even Welsh people with no knowledge of the language would use.  Sadly, like many Welsh people, Clarke had to learn the language as an adult (even though her parents were Welsh speakers) because those of her parents’ generation were often convinced that speaking their native tongue would somehow hold them back.  Clarke now does translation work as well as being a poet (with at least a dozen published books of poetry since 1971), lecturer, playwright and, of course, smallholder.

While Clarke never appears to make overt political comments, some of her historical poems do not appear to be simply about history.  ‘’Talking of Burnings in Walter Savage Landor’s Smithy’’ mentions “an abbey sacked” and “Cromwell fires the map” but also slips in “a terrorist’s bomb” and “petrol and a match”.  Unquestionably, her references and points are not solely embedded in the past.That last is a far from isolated example.  However accessible Clarke’s poems may seem initially, there is always a subtext, a metaphor, a parallel time.  All of these poems need to be read more than once.