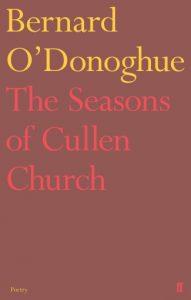 Originally from Cullen, Co. Cork, Bernard O’Donoghue has been an English don at Oxford University since 1965. This is his sixth collection. O’Donoghue has been a recipient of the Whitbread (now Costa) Prize for Poetry and Faber published his Selected Poems in 2008.Being shortlisted for the T. S. Eliot Prize (for the best collection of new verse) is an accolade in itself, and this, combined with O’Donoghue’s credentials sets my expectations for Seasons fairly high. O’Donoghue’s style seems open, verging on conversational, but do not be lulled into thinking this necessarily equates to easy accessibility; these poems are complex, layered and brimming with literary allusion. However, almost paradoxically, they can also be savoured and unpicked by a reader not well versed in classical literature.

The Seasons of Cullen Church is peaceful and intimate; indeed, it is like meandering through an old Irish churchyard, pausing at the poem/gravestones to read and reflect. This collection is in part about capturing the memories which are already beginning to disintegrate. In the first poem, “Waiting for the Horses”, O’Donoghue begins:

So wistful is the recognition now
of all the places that I hardly noted[.]

Several poems recount incidents from everyday life in Cullen before the poet’s departure for England at fifteen. His memories are woven with local folklore but remain sharp-edged. The often hard pragmatism which govern many decisions in rural life is offered up to us. For example, in “The Will”:

…they naturally set about
ensuring that his wife would not inherit the farm.

In “The Din Beags”, three sisters, “Childless all three”, balked at the gravedigger who suggested burying their beloved horse without dignity, oblivious to their emotional attachment to an animal: ‘We can saw the legs off/and throw them in with her.’ “The Inseminators” also follows this theme:

…the glass pipette
they’d forced into the cow’s unprivate parts
that we’d e vaded with the soft term ‘dairying’.

As with Seamus Heaney, many of O’Donoghue’s poems are concerned with the land, but focus on the people who live on it rather than on agricultural processes. In the wake of the “Home Place” launch to celebrate Heaney, “Ballybeg Priory” asks if allowing a natural crumbling is perhaps a more authentic commemoration than a commercial “heritage” centre to pay homage to a writer’s legacy. Raised an Irish Catholic, many of O’Donoghue’s poems touch on religious observance. The title poem, in cinquain form, is redolent of the Stations of the Cross and pulls together the church building, its landscape, practices, people and hope. O’Donoghue’s mastery of dark wit is shown in several of Seasons’ poems. In “The Republic” Martin le Vay turns against the Concise Oxford English Dictionary, “A Sin of Your Past Life”, sees a young O’Donoghue re-presenting ‘old’ sins at the Confessional and in “Stigmata” a (presumably) widow shouts “Those cursed turnips” when she sees the chapped skin on the hands of her husband’s corpse. Small, striking snapshots of Ireland, “Dublin Bay” and “Swifts” (seven and nine lines respectively), in particular, invite re-reading several times.

O’Donoghue moves infrequently into confessional poetry, but “Specific Gravity” is an arresting grief poem. It is set in the Dingle Peninsula’s Connor Pass, one of the most stunning vistas in Ireland – or possibly anywhere. Having driven the Pass a few years ago, it is a perfect backdrop to this poem’s grieving process. Another poem of confessional reminiscing, “As if the Hare” takes us from a current observation to the more distant past:

…turning,
in no great hurry, he loped into the field
through the gap we’d made there in the ’fifties

evoking Heaney’s poem, “Digging”. Seasons concluding poem, “The Boat”, is indeed in memory of Ireland’s greatest poet and written as a parallel to “Piers Plowman” (passus 8).

Much more could be said about The Seasons of Cullen Church, but in summation, it offers many seasons of its own in terms of unpicking, understanding and reflecting. This collection does not disappoint and would be a worthy Eliot Prize winner.