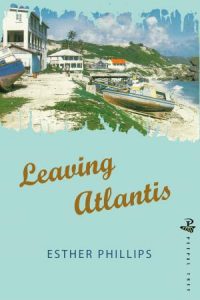 Inspired by the ideals of pan-Caribbean unity espoused by her muse, yet obscured by his shadow, Esther Phillips steps out from behind this unrecognition to offer a candid reflection of life and love. Dedicated to the highly publicised and acclaimed Barbadian writer George Lamming, her “commensurate artist” and lover, Leaving Atlantis recounts Phillips’ experiences through wistful poetic vignettes which chapter the arc of their relationship.

“The Lord never sends a bird without a branch.” Borrowing this quote from Lamming’s mother, Phillips’ expression of renewed optimism heralds Lamming’s return to Barbados amidst his regular departures with a redeeming cheerfulness. That Biblical reference frames the opening poem “Coming Home”, also the title of an essay collection by Lamming. From the outset in Leaving Atlantis, Phillips’ political, cultural and personal sympathies are demonstrably bound to Lamming, a fervent Marxist who was also a central figure in navigating Barbados to decolonisation and cultural emancipation. Phillips’ thoughtful narration is coupled with striking naturalist metaphors and are the core of this book. In the self-effacing “Unseen”, she writes, “Often there – in your river-surge – of voice – like silt, like debris – diverging – through twisted roots”.

Phillips writes in free verse, making frequent use of assonance and alliteration for emphasis and fluidity. “There’s an ellipsis in the echo” is one such delectably complex and self-reflexive line. While Phillips’ metaphors do much of the talking, her choice use of devices such as enjambment and stanzaic arrangement set the tone, which varies to match the moods and the real life events depicted, “sometimes with loud – passion – or in a mere whisper”. Many of the collection’s “shy” poems have their very short line length elongated through punctuation and enjambment for subtle emphasis and resonance. By contrast, the languid lilt of poems such as “Air” have a stanzaic quality which mimics a tidal ebb and flood.

Such poetic versatility and diversity highlights the ambivalence of Phillips’ personal life living in Lamming’s shadow. “I can venture out – to where you are” she remarks in her poem “Courage”, hoping to claim some recognition and balance from their relationship. In Leaving Atlantis perhaps Phillips’ voice emerges somewhere between the confessional whisper of Sylvia Plath and Diane Ackerman. Stylistically, these poems bounce between catharsis and poignancy. Some, such as “Transition Radio”, read as conversations between Phillips and Lamming and use colloquial language, delivering a diarist’s intimacy.

As Phillips’ third and most recent poetry collection, Leaving Atlantis showcases her poetic ability and her continued commitment to her craft. She has already received a number of poetry awards and her poems have represented Barbados on several occasions, perhaps most notably at the 2014 Commonwealth Games in Glasgow. Phillips joins a growing community of esteemed Caribbean literary figures being heard and lauded on this side of the Atlantic; writers of the magnitude of Kei Miller, Kwame Dawes and Jacob Ross, as well as her own “commensurate artist”. Published by Peepal Tree, an English-based Caribbean and Black British press, Leaving Atlantis is indeed a fitting collection to sit alongside these strong and exciting contemporary voices.

Overall, the mature elegance of Phillips’ poetry, profound and yet subtle, is a pleasure to read and will leave a lasting impression on the reader’s heart and imagination long after the book had been set down.