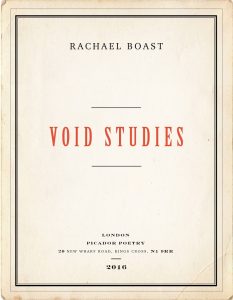 Rachael Boast won the Forward Prize for Best First Collection in 2011 with Sidereal. That same collection also won the Seamus Heaney Centre for Poetry Prize. Her latest collection, Void Studies, “realizes a project that the French Symbolist poet Arthur Rimbaud had proposed, but never got round to writing.” The collection’s title is almost a direct translation of Rimbaud’s planned “études néantes” – a collection of poems concerned not with conveying a message, but rather engaging with, and communicating, “the abstract spirit of their subject.” The poems in Boast’s work are unpretentious and engaging, with a focus on projecting moments, feelings and experiences, the essence of which will be significant to most.

The neat (five two-line stanzas) form of the poems in the collection’s first two sections, reflects the nature of the études (a short musical composition) through their succinctness and demonstration of Boast’s skill. In these (just over forty) poems, the poet embodies a great flexibility of expression – communicating, for example, the feeling brought on by a snowstorm (“Snow”) as well as the power of reflection in realising change, both of the self, a situation or relationship (“Quicksilver”). Although simple in form, the subject matter addressed is not necessarily simple in nature. Yet, even when engaging with apparently more complex topics, Boast writes in an accessible way:

The more I look the less there is of me
on a clear day by the edge of the water
in the moment when a memory surfaces
of the thoughts of another who at the time
said nothing but in a sudden movement
of their hand held the silence as if it were
a living thing: sleep-creature caught
in a wave transmitting – as now –
the same reflected light dreaming rapidly
along the length of a willow tree. (“Quicksilver”)

As demonstrated here, the poet’s use of metaphor (particularly those that draw from the natural world), is repeated throughout the collection. The poems in the first two sections (titled “I” and “II”, respectively) are also almost all entirely enjambed from start to finish, much like little fluid musical excerpts. By doing so, Boast slows her reader, enhancing the reflective qualities of her lines. Those pondering and lyrical aspects possessed by “Quicksilver” run throughout Void Studies, and are arguably emblematic – in a 2011 review of Sidereal for The Guardian, Ben Wilkinson described Boast’s approach as “stylistically lyrical, loosely formal, serious yet agile”. The somewhat confessional property of Boast’s writing in “Quicksilver” is also apparent throughout. Yet this quality is gently communicated, making her writing personal but not inaccessible. In turn, the poet is successful in her aim to write études néantes. There is no direct message communicated, but rather the unique spirit of the subject of each of the poems.

The final section of the collection is titled “Poems of the Lost Poem”. These poems break away from the form presented thus far in Void Studies as they are longer, single stanza works. Juxtaposed against the preceding poems, they seem faster paced, missing that now-familiar stanza break. Boast sustains, however, her use of natural metaphors and enjambment in these final pages, yet due to their differing form, they seem to suggest a more frantic, overflowing way of thinking. This change makes them no less effective as études néantes but merely allows Boast to convey different subjects – those where the spirit fits more comfortably into a slightly less gentle communication. There is an at times accusing, abrupt voice in the final section.

So: you would like to be the swallow
that comes to my window, watching me
talking around the edge of what I mean.
That would explain why you keep glancing
to your left, why the hair on your arms is alert
to the shape on the other side of the glass. (“The Abyss”)

Void Studies is a fascinating collection.