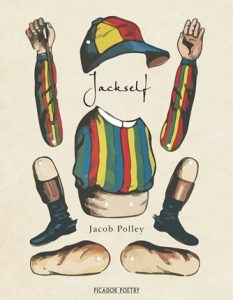 Jacob Polley is the author of four poetry collections. Previously shortlisted for the T.S. Eliot Prize, with The Brink(2003); Jackself is both a move away from the style of his previous collections, and also follows quite naturally in the same vein.

Polley’s work tends to explore eerie,  curious stories and tales. Rather like Ted Hughes, Polley investigates nature’s darker aspects. The Times described this  as being “poetry that imbues the everyday, the tarnished and burnished, with the possibilities of the transcendent”. The themes running through Jackself extend this further. The collection is loosely autobiographical, exploring Cumbrian landscape and memories, shapes, and childhood myths. It does this by investigating the many manifestations of “Jack”  in tale and legend: Jackfrost, Black Jack, Jackskip, etc. These curious characters, alongside others like Lucy Wren, populate the collection’s landscape where the familiar is made strange, and the strange familiar.

Consider “Jack Frost”, where we meet the familiar character, going about exactly the jobs we would expect:

This beautifully written lyrical introduction guides the reader panoramically , stopping to focus on small details, and feels rather Christmas card-like.  Yet Jack Frost is wearing what seems to be curious fancy dress. Not a rustic costume, nor anything made of frost and snow, but rather,

Wren, too, begins as a beautiful, nostalgic winter vision. But we quickly see that for Wren, freezing everything is not part of a natural seasonal cycle, but rather a desperate, delusional attempt to freeze time itself, to “keep everything just as it is”. Here, Polley’s poetry acquires a keen political relevance. In a climate of “hard Brexit” and the far right’s weaponising of nostalgia, Jeremy Wren holds glimmers of  some politicians desperate to recover a non-existent British “golden age” In poetry focused on folk-tale and myth, necessarily searing political relevance keeps the collection contemporary and fresh.

Earth’s creeping, crawling things are sworn upon, counted out as constants, as lode-stones by which things can occur. There is a deliciousness of disgust, revelling in nature’s less desirable, less often noticed aspects. When Jackself does appear, he is utterly terrifying:

A soulless, glowing creature without obvious body, Jackself is possibly in league with the devil (the “High Fireman”) or at the very least enslaved to a more powerful creature; the stuff of childhood nightmares.

Polley has assembled a powerful,disturbing collection, quite unlike anything else in contemporary poetry. Strange and unsettling, it lingers , the nursery-rhymes worming their way into the ear.