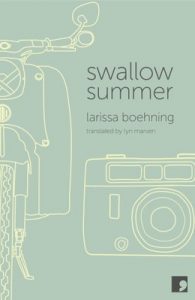 Comma Press is one of the better known small publishing houses that has built its reputation as much upon a backlist of work in translation as in English. Comma’s many anthologies, short story collections and novels by writers from Britain, from across the Channel and further afield  are waking us up to the richness and variety of world literature, reminding us, in our riven post-Brexit, Trumped-up nationalist world, that yes, we are all very different, and yet also the same.

Larissa Boehning is as award winning novelist in Germany but Swallow Summer, a short story collection of startling range and tone, is her first work to be published in English.  In “Full Speed Ahead, In Neutral”, describing a group of young people on holiday in Tel Aviv out clubbing for the night Boehning describes an easy translation between one culture and another, both as interesting as the other:

He hailed a taxi and spoke to the driver in Hebrew. They exchanged a few words, then Oded said to Natascha, in English ‘He asked me where you come from’. The taxi driver stopped at the lights, turned around, ran his hand over the seat cover and said in broken German, ‘I lived in Frankfurt once.’ Natascha tried to smile politely. ‘And I drive Mercedes’ he said, and laughed… She felt like she was sitting behind a screen.

This kind of narrative structure, moving between language and comprehension, surprising and banal, is a key note of Boehning’s subject and style. Just as her stories seem made up of random incidents yoked casually together by place or time, so too does their very telling appear contingent, uncertain. It’s as though she has created her own literature of non-sequiturs, stops and starts – yet each detail, like that hand running over the seat cover, is rivetingly real and mysterious, mimesis and metaphor both.  In  “Matchstick Cathedrals” , two old men living together discover a young girl sleeping rough in their garden.  They go back to their quiet, aimless conversation after taking her sandwiches; Jott, who likes to build things with matchsticks, remembers his late wife: “She said to him once, ‘Some people are like your cabinets. They have a secret’. He had replied, ‘They are just drawers.’ She had looked at him sadly and said ‘My love, sometimes it’s important not to find those drawers’…” The disjunction between the two sensibilities sums up the texture of this prose exactly.

Titles of other stories all hint at the strange otherness of Boehning’s sensibility. Whether young or old, male or female, whether speaking out loud in America or Germany , in a hotel or in a car or in an empty apartment, her characters remind us how vulnerable we are to the vagaries of language and meaning, how we can’t begin to approximate empathy if we don’t try it out first in words. In “Silent Fish, Sweetheart” the protagonist’s mother remembers how her own Russian born mother would not speak aloud, while the protagonist herself waits to hear a confession of love from her boyfriend:

My lover, the stranger that I call mine, has disappeared” she writes, but then, “All of a sudden he is here again. I open the door and he is leaning  one hand against the door frame; he asks if he can come in.
‘Why?’ I ask.
He replies, ‘I just want  to hear whether I am the one that you love.’
‘ Yes’ I say, ‘ I just want to hear that too.’
‘You’ll be waiting your whole life long to hear it’ he says, ‘if you cant say it yourself.’
‘I want, I want” I say again, and then I can’t speak any more.

Here is fiction that reminds us, in its infinite detail and peculiarity, that it’s more important than ever, in these times we are living through, to “want” to say, and even when we can’t speak, to listen. We have Larissa Boehning and her translator Lyn Marven to thank for a reading experience that opens us up to a wider world, without resorting to didacticism or the false glamour of the exotic. These quiet, idiosyncratic stories are highly articulate even in their silences.