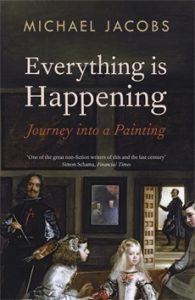 As explained by Ed Vulliamy in the foreword, Michael Jacobs was working on this book when he died prematurely. Jacobs had hoped that the very process of researching and writing the book would enable him to solve the mysteries of the painting he regarded as the world’s greatest: Diego Velázquez’ Las Meninas. More broadly, in so doing he also hoped to show how to look at any work of art. Originally trained as an art historian, Jacobs became famous as a travel writer and Hispanophile, returning to art history only later in life.  In the course of investigating the painting he journeyed on the same routes through Spain which he had followed many years before. As things turned out, it fell to his partner Jackie Rae to collate those parts of the book which he had completed, and to his friend Vulliamy to write the introduction and conclusion. Vulliamy’s introduction reflects the great status of the painting and also its baffling nature, which has resulted in a plethora of theories about its meaning. These have only proliferated since Michel Foucault wrote his seminal chapter on the painting in his 1966 work Les Mots et les Choses (The Order of Things).

The key puzzle lies in the status of the “onlooker”. Many of the participants in the painted scene are looking directly out of the canvas at us, or at the point where we are assumed to be situated; that point however is reflected in the mirror which hangs at the back of the depicted room. The mirror, in turn, shows the image of the King and Queen of Spain, who are being painted by Velazquez, who also appears in the painting. The artist himself, in the act of painting would of course have stood where we, the viewers, are placed; so painter, subject and spectator become fused.

Jacobs’ descriptions of his visits to Spain, past and present, set the scene well; the painting stands as an eternal backdrop to their Civil War and current economic woes alike. Above all, his picaresque encounters with Spaniards, most notably members of the family who packed the painting for safe removal during the Civil War, bring Jacobs’ expeditions to life. He researched the painting widely, and had an interest not only in the broader issues of representation which the puzzle produces, but also in such small details as the type of cup shown in the painting, and its possible contents. His researches became “an ever-expanding labyrinth”, but none of the theories he encountered brought him any closer to “an understanding of the artist’s intentions”. It is here that we see perhaps the fundamental fault line in this otherwise fascinating book: in a post-post-modern age the notion of seeking a universal definition of an artist’s intentions may be seen as a futile exercise. We, the spectators, will always bring our own interpretation to the work, so the quest undertaken by Jacobs is necessarily doomed. This seems especially to be the case for Las Meninas, where the artist has ensured that every individual who stands in the place of the artist and his King and Queen to look at the painting will, by definition, have his or her unique view.

Although Jacobs felt that he had perhaps unlocked the painting’s secret – a revelation which I will leave the reader to discover – it seems probable that his conclusion was more of a reflection of his own circumstances than a universal answer. As Vulliamy puts it in his coda to the book, “the greatest secret is that there is no secret”. However he also, correctly, states that this book serves as a road map to anyone looking at any painting which “grapples with the enigma of representation”.