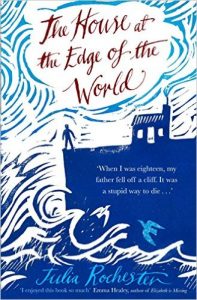 If you are looking for fiction that intertwines realism and the uncanny then The House at at the Edge of the World by Julia Rochester is the right novel for you, portraying as it does, adulthood from a different perspective, and one that evokes nostalgia by examining the changes and evolution of a child’s vision as s/he grows up. Moreover while it gives you at times the sense of an atmosphere under which any magic can happen, it also takes you back to reality, reminding you that life is not always what we make of it. In addition, the novel is written poetically, filled with similes and metaphors, making reading a pleasant experience, despite the pessimism of its subject matter. Its imagery constructs a scenery of untamed nature which parallels the main character’s personality. The House at The Edge of the World was nominated for the Baileys Prize for Fiction and also the Desmond Elliott Prize and is a novel worth reading.

Rochester’s novel  is set in a wild scenery of craggy mountains in combination with a raging sea, setting an atmosphere of frustration; the endlessness of the sea becomes a symbolism of freedom and independence, something that young Mowenna struggles to acquire but as the mountains suggest, she is also surrounded by obstacles and barriers that she has to overcome. Morwenna Venton shares an unconventionally close relationship with her brother Corwin; this relationship acts as a sanctuary which allows them to escape the hardships of their everyday life. Their adolescence is troubled by the death of their father John, who appears to have fallen off a cliff accidentally – something which worries his children later in the novel when they try to investigate the mystery of his death. Although the siblings follow different paths, with Morwenna moving to East London and becoming a bookbinder and her brother travelling around the world with the ambition of improving it, incidents bring them back together to where they started, such as when their grandfather Matthew falls ill.

Morwenna’s innocence is demolished when she discovers her mother’s affair with their father’s best friend; Corwin flirts with the idea that his father’s death could have been suicide. The family drama follows the two young characters into adulthood, where they still find it impossible to adjust in a normal life. Secrets and mysteries binding them together stand also as an obstacle, preventing any other relationships from flourishing; in addition, their father may not actually be dead. This provided suspense while reading it, and surprised me when the turn of events did not have the outcome I expected.

At first glance, The House at the Edge of the World appears to be a novel of drama and adventure; yet Rochester also touches on philosophical existentialist matters, particularly through Morwenna’s and Corwin’s struggles to understand the meaning of their existence. The novel poses the question of your life’s significance, especially if your presence does not make any difference to the world around you. Rochester also ponders the idea of whether you can recreate or forge a new life – it seems that nobody has the power to do so. This brings us to the big question: can you be alive, but die in a person’s heart and mind, or is it preferable to physically die but remain immortal as a memory? Death in the novel is treated allegorically and literally, combining the ordinary with the metaphysical, creating a bizarre and bewitching atmosphere in which anything can happen withh results that could either be curses or blessings.

Overall the novel manages to embroil drama with sharp humor and sarcasm, creating the desired balance between emotion and humour. Furthermore, it shows how the characters’ perspectives evolve around the circumstances they face as they mature and develop. Nevertheless there are also factors, such as love, which stand firm against every difficulty, since what actually prevents Corwin and Morwenna from going insane is their mutual understanding and communication. The House at the End of the World is an ode for people who still keep their inner child within them and find themselves unable to adjust to conventional life and reality. If you are one of those people just like I am, then you should definitely give it a chance.