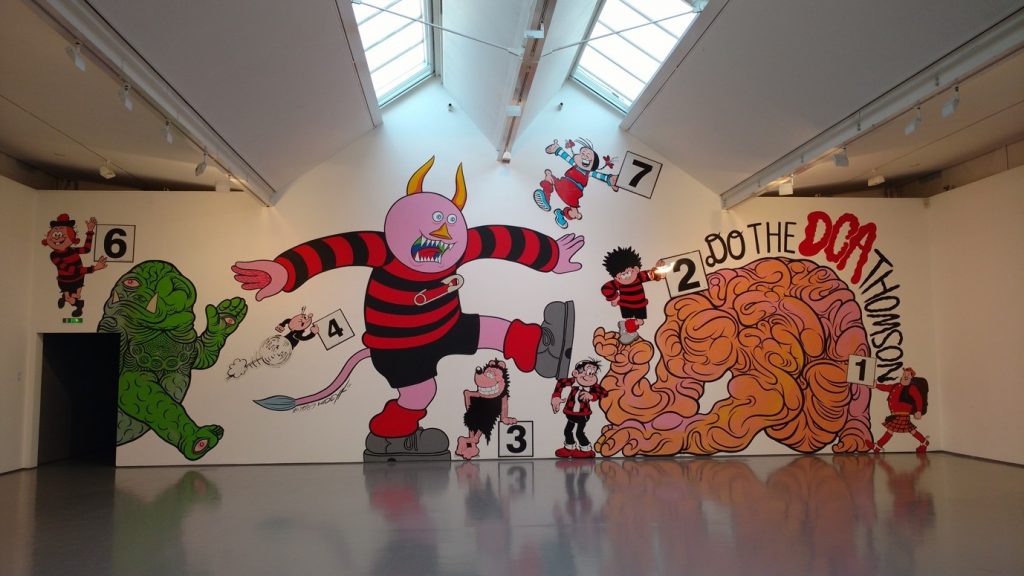 Jings! Crivvens! Help ma Boab! As part of the celebrations of 80 years of the iconic Oor Wullie and The Broons, DCA ‘s latest exhibition features the responses of six contemporary artists to items from the DC Thomson archives.   This follows on from the summer’s Oor Wullie Bucket Trail, which has generated  enormous success  – and continues to do so, through the many public sightings of the artist-designed figures, including the Christmas window in Gillies in Broughty Ferry.   This has brought huge joy and community spirit to  Dundee and more widely across Scotland, including featuring on the First Minister’s Christmas card this year!

The exhibition also displays some objects from the DC Thomson archives themselves.  One visitor was excitedly telling her children about the gifts received with the Beano, and the Oor Wullie fudge tins, which she recognised in the items of archive material.  The love and affection felt for these cheeky characters was evident!

Visitors are drawn into the world of comic characters such as Oor Wullie, Dennis the Menace, Gnasher, Desperate Dan – all at the heart of the culture and fabric of Dundee.  Hideyuki Katsumata gives a pink and turquoise, punky, manga twist to Dennis the Menace, which highlights the mischievous ‘menacing’ which is so integral to his persona.

Sofia Sita has created an artwork entitled The Dundonians, inspired by The Broons, where DCA visitors were invited to submit photographs of themselves next to a mural painted outside the galleries before the exhibition opened .  Sita then transformed these images into an engaging mural of pictures in the style of family photographs.  This gives another clever way of interweaving the comic characters with the people of Dundee.

Malcy Duff’s new comic The Pineapple is inspired by Oor Wullie and The Broons and visitors are made to feel part of the story, sitting on the plastic buckets reading copies of the comic, while looking at the large metal cut outs of Dennis, Dan, Billy Whizz and Minnie the Minx which formerly acted as signage in the Overgate Shopping Centre.  These all highlight the centrality of these characters to the life of Dundee, as borne out by the statues of Desperate Dan and Minnie opposite the City Square.

Craig Coulthard’s drawings inspired by the Commando comics, cleverly replace the original text with words actually spoken by a WWI soldier in the 1960s BBC interviews on the Great War.  The information on Post Traumatic Stress Disorder and Trauma Risk Management chillingly stops the viewer in their tracks, as it gives a stark portrayal of the impact of war.  Juxtaposed to these drawings a short video tutorial on painting explosions by DC Thomson’s Commando artist Ian Kennedy conveys the skill required in the layering of drawn lines to create a realistic effect.

Rob Churm’s one page stories drawn with paper, ink, biro and Tipp-ex are inspired by the Jonah  strips from the 1950s and 1960s and give  a contemporary slant to the original features.

Rabiya Chouldhry creates The Coconuts based on the original idea of the Numskulls as figures transformed into her own childhood memories and dreams, making a clever play on the agency of the Numskull technicians in her own mind.

Overall the exhibition gives a fun, witty and often thought-provoking insight into the world created by DC Thomson comics, and demonstrates their key place in the hearts and minds of the people of Dundee and beyond.  The warmth and cheer generated by the exhibition make it an ideal Christmas show, bringing a little bit of magic to all who venture in.