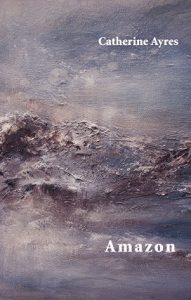 Sister, it’s time
to trace the stories on your skin.
Slick our myths across your chest.
Open your wounds. Begin [.]

Amazon charts Northumbrian poet Catherine Ayres’ journey through breast cancer, a mastectomy and the fallout for herself her family, friends and relationships.  Normally, I avoid reviewing friends’ work, but I have made an exception for Amazon, her first full collection.  Her work is unflinching in a painful arena; to compromise in reviewing would be shameful.

The last man to touch my breast held a knife

My lover said nothing;
his eyes told me to wear a vest[.]

In four sections, the first “Something happened at the hospital”, opens with the poem “RSVP”, recounting the diagnostic meeting, initially in fittingly clinical language. Yet by the third stanza, there’s a “cuckoo clock of doors”, and soon it “turns my heart/into a fish.” “Too late. The party’s started” closes the poem. In a microcosm we have something of the whole collection here: raw with honesty, but elsewhere pared-down, plain speaking and pithy observed… but soon there is a move into a captivating way with metaphor, to the point of surrealism. When there is humour, it’s blackly ironic and self-depreciatingly controlled.

I will return to empty you of what you’ve never had.
I won’t fail to disappoint.
(“A love letter from Disappointment”)

This last title is also that of the second section, the third being “Survivor in a photo booth” and the fourth “Lessons from the dispossessed”. In the first instance at least, this is a collection which deepens through reading: the sequencing of the poems is important, not only for its narrative, but also for the developing tonal and structural changes in the poems. By the fourth section, Ayres freewheels confidently with wordplay and internal rhyme in a rich mix between her metaphor’s parallel tracks. Consider:

I wanted seagulls sharp as broken teeth,
monstrous gougers, King-Learing
my squint for a bag of chips.
I wanted back in the small days.

To wear out the cliché, Amazon won’t suit the faint-hearted. The reader meets the poet “When I was bald, ears Spocked,” and “making love to LINAC” (third in the prestigious Hippocrates Prize, 2015), and when “Choosing a breast”:

She crackles them open;
it’s like Christmas on Mars.

Also, the reader meets her where her lover cannot, in “How to get rid of elephants”:

The bulk of the problem lies in bed,
where a huge flank of indifference can roll
you both, fully clothed, into opposing
edges, wincing at the sharpness of tusks.

All four sections examine cancer’s ongoing consequences in a file which refuses to be closed. Candid and gutsy, Ayres has no need to dress in martyr’s attire. Rightly, these poems voice as much anger as they contain fear and grief.

There is also comradeship with fellow-sufferers and gallus defiance as “The Amazon addresses the football mums”. That insistent spirit means that though harrowing, this is far from a depressing read:

I want grains of geese to spiral into dusk
I want a bus to float past like a ballroom[.]

Plath-like, there is a litany of recurring signs: the moon, the cosmos, birds, spoons and more. Where there is despair and oppression, Ayre’s imagery is dust and of dryness, but with hope her pictures grow fluid, and there is water: “a small secret in the cool mouth of the sea [.]”

Her collection finishes with a benediction on her reader, and hopefully on herself.
This is an extraordinary debut from a poet increasingly placed in many fine publications and competitions. I commend it to you, not in friendship, nor even because of the subject, but because it is a remarkable book, both beautiful and important.

Never dropping her guard, and needfully vigilant to the idiocies of certain online awareness-raising campaigns, it is worth ending on Ayre’s haunting and alerting words:

I often think about discarded flesh
pink is not the colour of cancer[.]