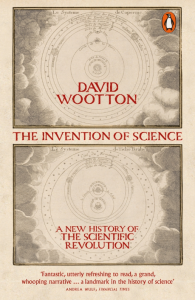 This is an important book.  As well as a history of the Scientific Revolution, it is a polemical defence of the very notion of such a revolution and an attack on the relativism which has infected much of academia over the past forty years, and especially in the history and philosophy of science.  This last aspect is especially timely since we are now in a world where a spokesperson for the US President can refer to a straightforward and easily detectable lie as an “alternative fact”.

Not long ago, the Scientific Revolution was a given in the history of science.  Nowadays, however, it is common to find writers who deny its existence and who treat, say, alchemy on the same basis as Newton’s mechanics.  The older school of thought is derided as writing what George Butterfield termed “Whig history”, that is, history which sees the past as leading up to and culminating in a glorious present.  Wootton is not advocating Whig history but opposes extremists who have extended the concept to include any history that “looks backwards” for the origins of the present.

Wootton sees several factors coming together to produce the Revolution: the production of new instruments such as the compass, the telescope and the pendulum clock which extended and improved the senses; the printing press which disseminated the new knowledge and led to the possibility of repeating the experiments of others; a new climate of thought, triggered by European geographical discoveries which introduced the very idea of “discovery” and the concept of “fact”.  Through a scholarly dissection of a wide literature, two chapters, “Inventing Discovery” and “Facts”, argue convincinglythat these two concepts were introduced in the 15th century; the word “fact”, in its modern as opposed to a narrowly legal sense, only appears in English in the mid-16th century and its German equivalent was described as “still youthful” in 1778.

The rise of contemporary relativism can be lightly traced through a few authors, though there are many more.  First, Thomas Kuhn whose Structure of Scientific Revolutions (1962) saw history of science in part as a sociological study of the behaviour of communities of scientific practitioners.  He introduced the now grossly overused word “paradigm” to identify the dominant theoretical framework governing scientific practice at any given period.  It should be said though that Kuhn spent much of his later career denying he was a relativist.  Next, there is the cheerfully extremist Paul Feyerabend whose Against Method (1975) argued that astrology and astronomy should be treated alike.  He was undoubtedly a relativist. More recently, the work of Steven Shapin and  Simon Schaffer has argued that science is  not “constrained” by nature at all, and that scientists are making it all up!

Now this kind of relativism has had a ready-made audience in social science and arts disciplines as it attacks the high status of science as the primary source of reliable knowledge.  Science clearly does not produce “truth” since any scientific theory, however successful in explaining and predicting phenomena, is always potentially open to being superseded by another theory.  But, Wootton argues,  science, as well as explaining and predicting phenomena, which allows it to claim its status as a producer of reliable knowledge, also establishes facts.  Knowledge is thus  accumulative, with scientists always building on and adding to the work of previous generations.  As Wotton says, “It is this peculiar feature of modern science which makes the history of science since 1572 uniquely a history of progress, and makes it inappropriate to write history of science in the same sceptical way.”