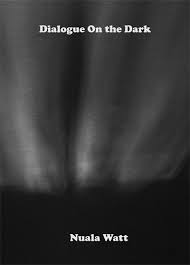 In a context beyond the confines of her pamphlet, Dialogue on the Dark, Nuala Watt has stated that “If you have a serious and/or lifelong condition, you need to develop a psychological firewall […], an essential piece of psychological kit” (see note below).  Indeed the first page in the pamphlet is devoted to Watt’s response to John Milton’s deep despair at the loss of his eyesight, expressed in “On His Blindness”. Whilst it would be difficult to draw exact parallels with Milton’s situation – the gradual loss of the glory of the heavens, the reliance on others for reading in his pre-technological age– Watt is determined not to succumb to such misery:

Herein lies the clue to Watt’s “psychological firewall” – the desire to use her one-sixth vision to make her poems, creating visions from her own unique perspective. She refers to her condition as “eye quietness” (“Dialogue on the Dark”), freedom from the necessity to see objects as sighted people might. Her shadowy world is full of possibilities denied to others:

Even the placing of her words on the page, her unconventional line breaks,  reflect the thinking of a poet whose vision comes from within as much as from without. The sounds made by speech create images and narrative for this word-smith: “disagreement a shower of sparks”.

For Watt, to sit before the optician’s eye chart in the poem of that name, is to have her firewall destroyed, to remind her of her true vulnerability.

Only occasionally does the poet refer to the other “half” of her condition. In “Floors” the third person (who is Watt herself) speaks as she copes with the everyday problems of uncertain movement around unknown places,

Watt takes an unexpected turn away from the poetry created by her sensory and physical issues in “Mermaid” and “Selkie”. The magical reality of the daughter of bemused parents wondering about their offspring is charming:

The hilarious but gruesome image in “Selkie” needs no explanation from any reviewer. The fishwife who is dismissed from her work

Watt’s occasional references to her muscular condition provide her reader with some remarkable images. She might fall and “disenchant” her ankles or she might hide from the other world, imagining herself invisible, “outlineless” (“Fireblue”).   In “Evangelist”, the street preacher whose unwelcome offer of prayers “for your feet” has no understanding of Watt’s world view as she shapes “a woman she’d prefer out of the air”. Watt has no intention of being what the “healers” who accost her unasked want her to be:

Domestic violence and the shame that silences the victim “If you just tell her she invited it” (“Scold’s Bridle”); confidence in the face of attempts to crush the  spirit (“The Rough Guide to Wonderland”); the supreme importance of sound for a blind person in interpreting the world (“Birdsong”). All these, and more, are grist to Nuala Watt’s mill in this, her debut pamphlet. I look forward to reading more of her poetic insights.