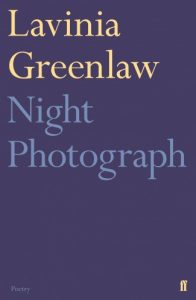 Night Photograph is a reissue of Greenlaw’s first collection, originally published in 1993. The collection was shortlisted for the Whitbread and Forward Poetry prizes. Greenlaw’s subsequent work has included fiction and non-fiction, and she has also produced several radio programmes with the BBC. The poet was born in London and she has lived there for most of her life. Her poetry frequently draws from science for its subjects and is sharply observed, restrained and elegantly crafted.

The collection opens with “Monk on a Tractor”; a wry view of quotidian life in a monastery on Caldey Island. It comments on tourists who “tidy their faces” as they go in, but having their expectations of entering a sacred space confounded by witnessing the mundane aspects of the monks’ lives.

In “River History”, which evokes John Masefield’s famous poem, “Cargoes”, Greenlaw paints a dense mosaic of images of the Thames throughout history. The poem is almost cinematic, or frieze-like in its colour and texture, as it winds through the docklands, charting the demise of industry; its imagery in the opening lines is exotic:

But lest the reader become lulled by the sweet rich scents invoked here, the poem explores the river’s darker era when

Centuries of waste had silted the river
till the water ran black over Teddington weir
and a bag of rubbish thrown from London Bridge
took six weeks to ride a dying current
out to the estuary. No swimming, no fish…

In “Yosemite”, the poet uses dark humour to recount a tourist couple’s visit to the National Park. The woman “climbed a tree and sang to the bears”, but her male partner

…could make no sense
of the lunatic peaks
thrown together
in a conflict of geology [.]

However, darkness brings comfort to him, until

she started humming
the one about a picnic.

“The Gift of Life”, purports to be a record of an artificial insemination of “the wife of a Quaker merchant” by a doctor, William Pencoast, in Philadelphia in March 1884. The poem is a meticulous report of the medical procedure. The poem’s complexity lies in the questions it subtly raises about religion, medical ethics, patriarchy, and by implication only:

My finest student provided the sample,
Applied with the aid of a rubber syringe
Commonly used for agricultural livestock.

The wife, drugged with chloroform, is unconscious during the procedure that neither she nor her husband have consented to. The use of the rubber syringe used for livestock marks her down as the merchant’s “chattel”. However, the poem ends,

It is now the day after Christmas.
I heard this morning the merchant has been
Blessed with a son. God’s will be done.

With a suggestion of the Virgin Birth, the Doctor closes the episode with “God’s will be done”. Quite clearly, God had nothing to do with this most human intervention!

The poem that the collection takes its name from, “Night Photograph”, describes the views from a ship crossing the English Channel at night in winter. The poet’s skilful use of imagery drawn from film processing techniques evokes a sense of images appearing and fading:

Beyond the boat, the only interruption
is the choppy grey-white we leave behind us,
gone almost before it is gone from sight.
What cannot be pictured is the depth
with which the water moves against itself,
in such abstraction the eye can find

no break, direction or point of focus.

The original Night Photograph was a brilliant debut collection from a poet and author who has continued to produce literary and documentary work of the highest standard. Greenwood has said that she enjoys “making sense of things that are unfamiliar” and this reissued collection shows that, 23 years after its initial publication, the subjects under examination are still as fresh and unfamiliar as before.