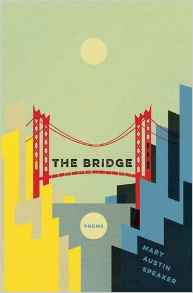 Knowing she would soon be leaving New York, Mary Austin Speaker decided to create a piece of work which would honour the city she had called home for over a decade. The result is her wonderful new book of poetry, The Bridge. One of the reasons that this collection is so compelling is that it was produced in an unusual way, as Speaker explains in the author’s note: “Each of the poems was composed on the subway while riding over the Manhattan Bridge. Because I worked in Manhattan and lived in Brooklyn, I rode across the bridge twice a day. I wrote a poem each time I crossed for several months.” This writing method lends a strong sense of immediacy to all of the poems in the collection.

Throughout the book, Speaker never diverges from her own point of view as she rides the subway. As we might expect, this leads to a lot of repetition between poems. Precise times appear frequently: in one poem “it is 9:28 AM,” while another was written “at 6:37 PM.” Imagery is often reused, like when, in two different poems, the outside world whizzing past the train window is compared to a zoetrope. The poems are also unchanging in terms of form, with the last line of each poem repeating the first. There is even a uniformity in the way the poems appear on the page: they are slender and aligned to the left-hand-side; they contain no punctuation and very few capital letters. It is as if the text itself has been shaped to resemble train tracks (I was not at all surprised to learn that Speaker also works as a book designer. She has obviously put a great deal of thought into how she wanted her poems to look).

The repetition and overlap of ideas between the poems, coupled with the fact that they are all untitled, lends a great sense of unity to the whole collection. However, there is a much more interesting aspect to Speaker’s use of repetition, which becomes apparent when we consider the lines:

In a collection which so frequently offers the reader “the same thing twice,” these lines can appear quite jarring. Is Speaker trying to undermine her own work? Indeed after coming across the same image for the third or fourth time it does lose some of its original impact. Sometimes, through repetition, Speaker’s words become stale, boring even. Yet this is not necessarily a bad thing. We have to remember that the poet is writing about the commute to and from work. Often the train ride feels like a “slog” or “a dumb routine.” To remove boredom from the journey and pretend everything is always fascinating or beautiful would feel inauthentic. Instead, Speaker lets us experience the commute as she would; we become habituated to the spectacular sights outside the window and begin to refocus our attention onto that which is ordinary but ephemeral. Instead of being mesmerised by the glinting windows of Manhattan’s skyscrapers, we find ourselves eavesdropping on other passengers’ conversations and imagining their lives from their contextless utterances:

And rather than being dazzled by the sight of the East River, we are awed when the train travels

at the same speed
as the train across the bridge
so that a man’s face
turned toward the window
was foreground to the swift
obliterating city [.]

In other words, Speaker lets us glimpse the magic of New York as if we ourselves are New Yorkers. By allowing this kind of shared experience to take place, The Bridge succeeds as both a joyous celebration and a poignant valediction for a city that is clearly very dear to the poet.