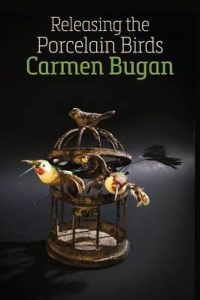 Carmen Bugan was born in Romania in 1970 and emigrated to the US in 1989. When still a child, she witnessed first-hand the brutal and repressive regime of Ceausescu, the last Romanian Communist leader. A daughter of a pro-democracy pamphleteer, Bugan grew up fearing news of her father’s death, particularly after his imprisonment. She found her vocation through his typewriter, which was then an instrument of contraband. After taking her PhD in English Literature at Oxford University her literary career took off. Her poetry counterbalances beauty with gruesome, haunting images of times past but not forgotten.

Releasing the Porcelain Birds (2016) is Bugan’s fourth collection of poems based on the 4,500 pages of Securitate files on her family. Its main theme is “the conflict between the free, fluid language of memory and the shackled, impersonal language of surveillance reports.” Unlike her prize-winning collection, Burying the Typewriter (2012), this one springs from the consciousness of Bugan the adult, and from the recordings by Ceausescu’s informants:

How far you travelled my still swans, my white sparrows
Archived for thirty years all over the country, shelved and cleared;
I see you now, when I am too old to take you in my hands[.]

Sixteen short poems comprise the first part of the collection (“FOUND IN SECRET POLICE RECORDS”), revealing the world of Bugan’s family. The free-verse stanzas follow a strict algorithm peculiar to each poem, alternating between four and two-line constructions. Interestingly, most of those poems also correspond to particular recordings by the Securitate and this parallel uncovers a startling duality in Bugan’s images. Parts of those Securitate records are even incorporated directly, often with inverted commas, as in the poem “There”, which creates, paradoxically, an aesthetically beautiful facsimile of the otherwise incarcerated actuality.

The boy was five years old and he trusted
His father’s stories about a life of plenty,
A country with lemon and orange trees.
‘It is something imagined,’ the records say.

‘Apples and pears and prunes are also good,’
the mother countered (for the microphones?) […]

In all three sections, the tone stays the same: placid, balanced, and contemplative. Its monotony and rhythm flows like a lonely river which brings certain tranquillity and serenity. In the last two parts that stanzaic and tonal repetition is interrupted by the adoption of a variety of structural forms: prose poetry weaves with poetic prose (“Walking with Martine”); the stanzas are deliberately longer and a waterfall of colourful images interrupts the poised grey river to depict Bugan’s life in picturesque France.

We wander under the canopy of arches deep into the woods that lead to fallen trees and thick thickets, magical and quiet as if no one ever walked into them. The air is opulent with leaf smell, humid earth, clearings release grassy sun-warmed currents that go up my arms making me giddy.

The continuous alliteration, the lush imagery, the soothing atmosphere all build towards a more personal and poetic ataraxia.

We want what the woman wanted in the prison queue in Leningrad, standing there with cold and whispering for fear, enduring the terror of Stalin’s regime and asking the poet Anna Akhmatova if she could describe it all, if her art was equal to it.

I can certainly attest to that now, after being in Bugan’s world of “frail syllables”, that such an equilibrium between history and art is not only possible, but is often the only way to assuage pain, to release the caged birds, to free oneself from the shackles of grief.

words alone saved us then
and bring joy now, the joy of finding them,

for in their frail syllables I recognize the old self.
Apollo has cleaned his instrument and left.