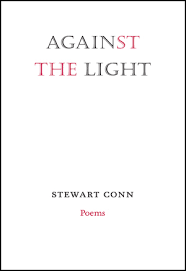 Against the Light is Stewart Conn’s latest poetry collection. He has won prizes such as Poetry Book Society Choice and SMIT Scottish Poetry Book of the Year Prize among many others. It has three sections, reminding me of a triptych; each of the sections focuses on different themes but together they form a strong collection.

Writing in free verse, Conn captures the mood of the winter in Edinburgh throughout the first section. Taking us through New Town into the Old Town, down Dundas Street, and passing various statues, the poet uses beautiful imagery to visualise the urban landscape: “the white horse in the shafts defying gravity,/ the tenements in the background all topsy-turvy […]’’ (“Ice-Cool’’).  Conn’s poetry is also filled with sound. Consider, in the same poem, how “an acrobat cavorting on a crystalline set/ of fine-tuned milk-bottles, or tinkling icicles’’, mimics that icy sound. Sound, ever present in this collection, is achieved through onomatopoeia (“eerie whooo-whooo of a freight train’’ in Milky Way) and also through alliteration (“frilly footprints/ patterning the porch’’ in “Watchnight Service”). Of course these are just examples, but they are scattered throughout this collection, giving the book its distinct flavour.

Admirably typeset, with attention to layout, Conn gives each of his poems the space they deserve. Readers are encouraged to consider each of these poems,  of very variable lengths, singularly. “Calton Hill’’ stands out, as befits a poem which recognises Edinburgh’s important position in Scotland as “the glistening clasp that fastens it, that pins it in place.’’

Conn’s poetry, while lyrical, can also be humorous, for example when he mocks the tourists in “Statues”:

the American couple emerging from Harvey Nick’s
and her ‘honey, I didn’t realise France was so close.

Have a look at “Exposure’’, where three boys, oblivious to being watched, leave “yellow squiggles in the snow’’. There are not many humorous lines, but the ones you find will delight you all the more.

The title sequence, Against the Light, composed of ten short poems is probably the most emotional part of the whole collection. Here, Conn reflects on the frailty of life by taking us on a journey, initiated by “Breakage’’, where he compares the breaking of a mug to the beginning of an illness: “the mug you clutched as you fell … hard to imagine them fitting together,/ the fractures knitting’’.  The difference between the object and the cells are so subtly blended that you can’t tell where one ends and the other begins. This section is very personal as the poet writes about someone close (a lover, perhaps) suffering from a debilitating disease. Human vulnerability is felt in each of the short poems as he considers not only the effects of the condition on the patient but also on himself. Indeed, he manages to contrast these twin perspectives in poems titled “Walk i’’ and “Walk ii’’

“Against the Light’’, the conclusion of this sequence, moved me to tears. While the poem opens optimistically with the “painkillers discarded’’ and “spring’s emergence’’, in the final four lines he captures the feeling of helplessness and hopelessness one might feel when someone close goes through a serious illness, when they don’t know if they’re on the road to recovery or death:

… though hard to imagine ever forgetting
that night I felt, had you been held against the light
of a candle, you would have seemed translucent
so delicately veined, but for your sustaining spirit.

The collection concludes with “Final Curtain’’, which was written to celebrate the opening of the new foyer of Theatre Royal in Glasgow. The poem reflects on the performances that the theatre has witnessed over the course of the years. And just as the performance ends, so does the poem with “the release of heart-breaks, in a torrent of applause.’’