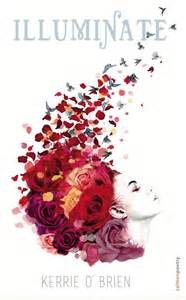 A common thread can make a poetry collection form a cohesive whole from the most diverse of parts. When reading Kerrie O’Brien’s first collection Illuminate, it is clear that the connecting thread is the poet herself. She offers the paradox of a youthful maturity. There are wise insights, creating poetry which is both visually and thematically captivating. This young Irish writer provides a unique view of cityscapes, from Paris to Berlin, New York and Dublin, and she fills the dark and crowded metropolis with light and human movement:

I waited outside
And I looked all along the street
Where the heat rose off the pavement
And quivered[.]

The poems themselves are both brief in stanzaic construction, and short in the lines themselves. There is an airiness, as though the lightest touch of metaphor and image has been used, enough to convey beauty, but not so flowery as to be overpowering, as can so often be the case with neo-romantic poetry. Still, the reader is drawn into what feels like an awakening of sorts, the contemplation of artists and writers that have walked the same streets as O’Brien does. The shock and emotional resonance felt by the poet on discovering the shared experience between very different and distanced individuals is a powerful force:

The back streets
Huddle low in the silence.

I knew where he meant
Felt like a slap –

Literary references hint at her past occupation as a bookseller in Hodges Figgis, Ireland’s oldest bookshop. O’Brien has described bookshops as being “pivotal”, and it is clear that her love of literature has certainly been fostered between the shelves. Name-dropping might in other works be called crude, allowing the writer to coast on another’s linguistic coat-tails, yet here, O’Brien’s use of artists’ and writers’ names has a quality of literary invocation, giving us a sense of the development of a writing mind where each influence builds on the last. By seeking out a particular writer such as Hemmingway as muse and guide, she is lead to a place of comfort:

But he led me
And right where he lived

Another thread that binds the delicate thoughts together is the effect of light. It is a motif that pervades the poems, dusting them with a vibrant imagery. The influence of the Romantics can clearly be seen here, yet the ideology is inverted, and it is as though the London of Blake has been flooded with light and colour; life remains, but is transformed into a strangely blossoming urban sprawl. She is, perhaps, an Urban-Romantic.

As the thread of identity winds its way between the poems, and as O’Brien’s own life holds the collection on a path toward literary growth, we are given glimpses of her world, of intimacy, and of relationships remembered fondly, not with malice or anger. As she says in “Austin Hugh”, “There can be beauty in grief“. This is truly the work of a poet who must be on the brink of a long and illustrious career. This is a collection that shows a poet finding her voice and herself, reflecting on her own experiences, loves and influences.

I think you need to be empty
To fall in love

To have been pure in yourself
For long enough
To know who you are again.