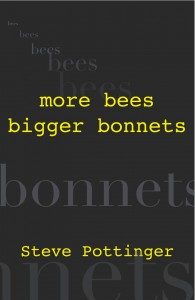 I’m a poet who loves words loves people
And believes some things
Are worth getting angry about [.]

Steve Pottinger, in his own words, is an angry poet. If you like your poetry with a cup of tea and a biscuit, look elsewhere. His latest collection, “more bees bigger bonnets” will shout at you, confront you, shake you up. Many are inspired by titbits of information (the cost of Margaret Thatcher’s funeral, for instance) and news headlines. From the outset it is clear that the poet’s subject matters significantly more than form – indeed, each poem surges with a need to expose and address contemporary issues.

With sing-song rhyme and refrain, Pottinger creates Bob Dylan-like ballads of social injustice that could easily be put to a jaunty tune. Take, for example, “Bongo Bongo bad”, his poem for UKIP MEP Godfrey Bloom, who condemned foreign aid:

your bills keep turning up fat
and your pay’s getting thinner
your boyfriend said he was blonde
turns out he’s a ginner
who’s to blame? The Bongo Bongos.

The poem is full of simple rhyming and British colloquialisms. Far from clashing with the serious political focus of the poem, this allows Pottinger to move between poet and everyman, using words like “ginner”, “mate” and “bloke”. The slang lets Pottinger take the direct approach, therefore making his collection accessible to all. If you don’t understand what he’s getting at, he includes notes that read rather like conversational anecdotes at the back of the book.

More than outbursts, Pottinger’s rants are wrapped carefully in a sly humour. Many of his poems reference everyday activities, from lighting a cigarette to going to Iceland to buy a pizza. Locating his words in familiar situations, Pottinger draws attention to the absurdities of society today:

there’s nothing worse than using google earth
to help you find your bum [.]

The collection is guaranteed to make you laugh aloud because you will recognise all too well what he’s on about – the people you sit next to on a National Express bus ride, for instance, wearing “jeggings” and drinking “vodka red bull”.

Unlike the ignoramuses he mocks, Pottinger’s rage emerges from a place of real compassion and love – he looks towards a better world:

where the old and the weak and the dying
are wheeled out each evening
to feel the rain on their cheeks [.]

In fact, don’t be fooled by his humour; Pottinger is a dreamer, an idealist. He demonstrates true vision, particularly in the last of his collection, “You ask me where I want to live, my love”. His fury is tempered with contemplation as he lists scenes of togetherness and brotherhood. This is the poem you could, perhaps, enjoy with a cup of tea and a biscuit. It is the point in the collection when the personal enhances the impersonal; when it becomes clear why Steve Pottinger is a poet: he has a bee in his bonnet. In other words, he cares about what he has to say, and he wants you to know about it.