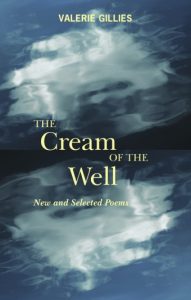 Over the last four decades Valerie Gillies has truly inhabited the Scottish and Irish landscapes; she draws from them a perpetual source of sustenance for her work. “The Cream of the Well” refers to the first sip taken at sunrise that was believed to have healing properties – a mystical quality which has a strong and ethereal presence throughout the collection. Since 1977 she has journeyed, making observations of increasing depth. For anyone who is unfamiliar with Gillies’ work, this new volume collects poetry from previous publications and sets these alongside  new poems. Read in its entirety, The Cream of the Well offers a poetic  topography of Scotland and Ireland: we can trace her footsteps and share her lens on the physical, historical and mythological aspects of the places she visits.

Poems from her early books, from Each Bright Eye (1977) to Bed of Stone, physically carve and build on those landscapes. The language describes a thick, earthy and dirty world; the vista opens on a “wayless country”, “open grassmoor that is paradise” and “barren cold”, for example. Humans and animals live on the land as one; images are used interchangeably, giving full life to these landscapes, animals and people in an unflattering and imperfect beauty. This brings to mind scenes of misty hills and mountains, mulchy browns and greens with pastoral smells and animals.

The Cream of the Well is edited chronologically so as to show the evolution of Gillies’ ideas. Her earlier works introduce and establish a sense of place to which later works add characters, narrative and mythology. All of these flow from title to title, much like the water springs that are the metaphoric source of inspiration for much of her work.

More recent collections focus on the history and folklore of the land, offering an often forgotten or unseen mysticism:

The Green Well of Scotland
is a dragon-hoard, where once the wily Dr Dodds brought ore
from the gold-wells of Cairnsmore to mint West Indian coins[.]

“The Green Well of Scotland” from The Spring Teller (2008)

To add to these ancient traditions, which are still treasured by many, Gillies uses  Gaelic or Scots vernacular to harness a very sonic or onomatopoeic quality which can only come from North of the border:

A spatchcock town, the ribcage split open
like a skellie, a kipper, a guttit haddie.

There is even an excellent homage to Burns in “Robert Burns’ Mither at the Well”. The attempt is successful, enjoyable and does not read as a poor imitation as so often such re-workings can. It is done with respect and confidence.

Despite earlier works being very conventional in their use of structure and white space, it is encouraging to see that later works embody, in physical appearance, the themes and images of her pieces. Consider, for example, “Viking Boy” from 1990’s Chanter’s Tune which is laid out to look like an ancient vase or urn. You may argue that this might be too literal yet it does serves to reinforce the poem’s underlying ideas. Later verse, “The Sleepers” and “Short Poems”, are presented visually in ways that are reminiscent of the undulations of the land’s topography, providing a refreshing visual variation.

It is difficult to do justice to this collection within the constraints of this review, The Cream of the Well marks a career spanning several decades. To say that Gillies’ The Cream of the Well is any one thing would be to do it a disservice. However this anthology can transport the reader to an other-worldly Scotland. It shows the strength and evolution of Gillies’ writing over the past forty years. Both fans and newcomers to Valerie Gillies will enjoy viewing a familiar country in a verbally expressionistic and atmospheric light.