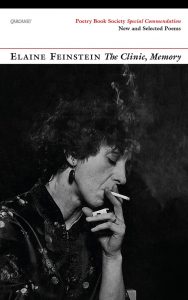 translator—has selected poems for The Clinic, Memory from twelve collections written over five decades which, alongside newly-written poems; these do indeed “put the solid world at risk”. Many of the poems are rooted in personal experience and family history so the whole volume reads as a loping memoir of sorts, from memories of childhood, lovers, marriage and motherhood to widowhood, cancer treatment and mortality. The overall effect is of a memento mori – death lurks in the background of almost every poem, putting every certainty at risk.

It took me a few poems to settle into her quiet, meandering pace but I soon found myself absorbed by her worldview. Not least because Feinstein is a first-class storyteller.  She is also a great observer of human traits and behaviours, and captures their subtleties and complexities in her poetry. Many of her poems concern her family’s Russian-Jewish origins but there are also poems about cyber-bullying, autism and refugees, and how we take “our shape from the/damage we do one another” (“Marriage”).  There are long narrative poems, elegies, nature poems, poems with Greek gods and goddesses at their heart. Yet every poem is about humanity – its small glories and griefs.

Nor does regret fuel the second poem, “Mirror Talk”, in which the narrator comes to have a better understanding of her mother, their relationship, and how each of them have imparted a sense of failure to the other. The younger narrator turned away from her mother:

Feinstein’s politics are always profoundly personal, whether in a domestic or global context,  contemporary politics always understood through her own particular lens. In “The News Channel”, she compares her grandfather’s experiences as a refugee with the plight of Syrian refugees in Europe today. The quiet refrain, “What news.        There is no news” says so much both about how inured we have become to suffering, and also how the displacement of peoples has always been with us.

There’s often a casual, conversational quality to Feinstein’s style which evokes intimacy – as if we’re all in the room together. “Annus Mirabilis, 1989”, begins:

And there are echoes, too, in the folkloric motifs, dramatic qualities and starkness in Feinstein’s work, of Tsvetaeva and Akhmatova whose work she has translated.

Though Feinstein has confronted uncomfortable subjects of ageing, betrayal, absence and loss throughout the five decades from which the poems of The Clinic, Memory are drawn, nonetheless, even in the bleakest moments, she encourages us all to “enjoy the dance.”