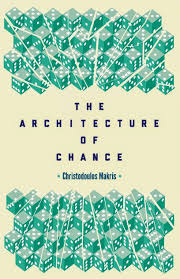 “People imagine poets are perpetually inspired.
This is not true.”

This perfectly captures the foundational ideas on which Christodoulos Makris’ second collection, The Architecture of Chance, is built. Described by Rick O’Shea as “one of Ireland’s leading contemporary explorers of experimental poetics”, Makris’ collection examines the nature of chance encounters in contemporary society, and how a poet like himself can depict these experiences. Taking snippets of overheard conversation, or stumbling upon other artists’ works and reimagining them in his own form of contemporary poetry, or by taking different forms of modern day media to highlight political and economic issues Makris creates this unique collection.

Akin to an elaborate connect-the-dots, every few poems contain a passageway into obscure areas of other art forms. Take “A 21st Century Portrait”, which appears to have a sub-heading “Douglas Gordon & Philippe Parreno”. Makris wrote this poem as a reaction to another art form, specifically Gordon and Parreno’s video art “Zidane: A 21st Century Portrait” of a 90-minute football match, which focused on only one player, Zinédine Zidane:

Makris offers a unique take on the piece by using his own art to comment. His poem “From Something to Nothing” with its subheading “Francis Alÿs” follows in the same style. Research into obscure artists on the Internet shows that Alÿs’ poetry often concerns itself with political conflicts. In Makris’ poem he takes the International Monetary Fund’s “about” section directly from their website, runs it through Google translate into eight different languages, and repeats this four times, each translation becoming slightly different from the last. It is simple yet poetic procedure, with the repetitive nature of the diction used fulfilling the phrase “From Something to Nothing”.
What does Makris have in common with these artists? They all challenge the preconceived structures of their own respective arts. Combining a style of free verse and modern subject matter, Makris’ work is the epitome of the contemporary poet’s working breadth and depth. “16 x 16” begins with the phrase “I would have been a completely different person without the politics and a completely different writer” then interchanges these words to create a new sentence. The emboldened word at the beginning of each new phrase, if read vertically, actually reads as an accrostice of the original phrase. These sentences, formed by a chance grouping of words, show how Makris’ ingenuity lies within his experimentation with the architecture of poetry. “Dissolution” is another strong example of this style:

Typography mimicking definition is a contemporary construct, and one which Makris employs expertly throughout his work.

Makris also challenges the traditional poetic form as a necessity when considering modern times. Referencing a wide range of media platforms, the poet uses these as a means to demonstrate current political issues and how people nowadays discuss them. A one-sided conversation in “Collected Emails” shows the developing issue of forced migration from Ireland due to redundancy, portrayed in the format of e-mail replies to an unknown correspondent. In “public-private” Makris creates poetry from his Twitter conversations:

This use of social media again shows Makris’ ability to find poetry in the modern everyday, whilst also discussing serious political matters at its core.

The Architecture of Chance experiments with a wide array of techniques, which combined together create an excellent contemporary poetry collection.