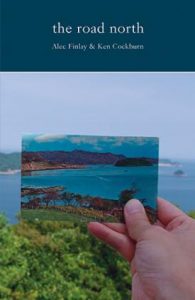 There is an element of this joint collection by Alec Finlay and Ken Cockburn, the road north, which seems to tease the reader into believing they are preparing to be thrust into an immersive journey through the shifting definitions of the Scottish Highlands. But is that tantalising offer honoured?

the road north describes rolling landscapes as predominantly “picturesque” for a large part of the first half of the collection. Despite the ever-changing offerings of glens and lochs, mountains and Munros, an uneasiness about the slightly Brigadoon view begins to emerge. The opening poem suggests “the day you/ enter the view/ from your window” with the implication that the reader too will be swept into a magical pastoral world, but the narrative struggles – “I’ll come back with the kids/ when they’re ready”.

The labelling of sections by season is a nod to Basho, to whom these poems are dedicated. But the relentless mention of the master and to Shirakawa throughout may be jarring to some readers in its repetition.  At times the poetry strains to make a connection any greater than a vague “Sma’ Glen is Shirakawa” or “Acharn is Shirakawa”. It would have been interesting to use the progression through the Highlands to relate and link the history of the poet’s inspiration and his works more clearly for the reader.

Both poets employ short stanzas, which emphasise the transition between each sight through sound qualities:

The medley of different “s”, “b” and “k” sounds resonates with the subject matter. Although I appreciated these qualities, I would have enjoyed a greater development of the patterning to reflect the natural growth more adequately. Too much of the language felt repetitive, which for me did not quite capture the inspirations and spontaneity the poets claimed for their journey.

Yet, some of the shorter poems in the collection are surprisingly self-aware and carry a different tone. Reflections on the sea’s power and the scale of the beach are succinctly described in three lines, which are vigorous and offer food for thought. Despite their brevity, they hold considerably more weight than so many of their longer counterparts. Arguably, this is partly because of their question and response format, a notable device utilised by both poets. But even here, for some, the poetry could be lost amidst the mouthfuls of dialect-heavy and Gaelic place names.  Others will of course see these names as poetry in themselves. So perhaps they consider the potency and imagistic simplicity of:

There are two poems here which experiment with, and divert from, the more expected structures, presenting in an almost Edwin Morgan-esque visual or concrete style: one poem is typeset as a ring, the other centred on the page with lines formed of no more than three words. These disjointed poems connect more (both thematically and stylistically) to their surroundings than some other pieces in the collection and demonstrate significant ingenuity.  I would have enjoyed more in this vein.

While the road north shows evidence of both passion and research, there is something in the sequencing and choices which for this reader at least obscures some of the hidden gems. The cover’s promise offered the scent of fine malt, but gave this reader at least a blend instead. For some that may be a comfortable choice.