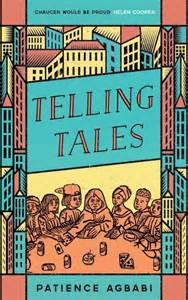 What does the word re-mix mean to you? Personally, I always associated re-mixes with music, taking an old song, lay it over a new beat, reharmonize the melody and BAM! Simple. But did you know that a re-mix can apply to other things too?  Like poetry? You’d be amazed.

Take Patience Agbabi’s collection Telling Tales. Shortlisted for the Ted Hughes Award, her poetry breathes new life into the medieval characters first brought to life in Chaucer’s Canterbury Tales. Chaucer’s original work famously tells the story of a group of pilgrims who, on their long journey to Canterbury, take part in story-telling competition to make their journey more pleasant. Fast-forward nearly seven hundred years and, through Agbabi’s genius, that original competition has become a modern-day slam.

Fittingly, Agbabi is both poet and performer. Her poetry has a musical quality which truly comes to life when spoken aloud. While I found this true of all these poems, I was especially taken with her adaptation of “The Wife of Bath’s Tale”, “What do Women Like Be’s?” While a vast majority of the poems in Telling Tales follow a rhyming scheme this poem is written in free-verse. While some may view the Wife of Bath simply as the embodiment of so many negative medieval stereotypes  of women, and others will find her personality greatly to their tastes, I can’t help but see her contemporary embodiment, Mrs Alice Ebi Bafa, as a radical feminist.  Consider her protest:

I am not a feminax,
I do not believe women are equal to men,
women are better!

While written for the voice, the poems themselves prove to be an interesting sight in print. “Reconstruction”, or the re-mix of “The Physician’s Tale”, practically leaps off the page. It offers an introduction that remains true to its roots in the form of a newspaper article reporting the death of a teenage girl who was beheaded by her own father after he in turn was blackmailed by another man. The poem might be told from the perspective of the heart-broken mother who lost her daughter, but if that’s the only point of view you can see then you need to look again. The poem is in itself a like a ransom note, riddled with hidden messages, and coded viewpoints, which  can be identified through its typography;

By linking together words of different font or size, we can draw out the other characters in the story. And whether you love it or hate it, you can’t help but applaud Agbabi’s ingenious use of text-speak in her re-mix of “The Monk’s Tale” “100 chars” :

At their heart the character’s tales remain substantively the same, they’ve just been given a modern twist. While Chaucer’s original already contained a diverse range of characters, Agbabi’s succeeds in transforming them into characters that are strikingly modern and multicultural. This re-invention  feels necessary because we are living in a significantly more diverse age. .  But deep down “Emily” is still Emilia, she’s just swapped her corset for a pair of jeans. Thanks to Agbabi’s remixes, we see the underlying timelessness of  The Canterbury Tales. Agbabi’s collection proves that they work just as well with the nitty-gritty aspects of life that our modern-day society offers as they did in Chaucer’s time.