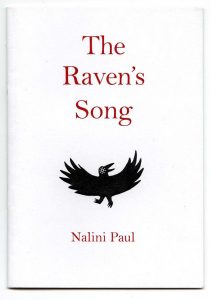 Its sound could wither the feathers of eagles
make fire from ice
play tricks with existence
changing form at a whim.

The raven: an omen of bad luck to the superstitious, a notable character in myths and fairytales, and self-evidently the predominant figure in Glasgow-based poet Nalini Paul’s The Raven’s Song. While poems from this collection were printed previously in publications such as The Written Image and New Writing Scotland in 2013, they come together in this pamphlet accompanied by illustrations by English-Canadian artist Catherine Hiley creating a collection that is defined aesthetically by its striking black, white and red colour scheme. The illustrations are vivid, occupying full pages, and at times these are integrated into the poems. However, these artistic decisions do not interfere with the reading of the poems, but they enhance the experience by providing another interpretation of the poetry, whilst fully immersing the reader in the narratives.

The bold and simplistic colour choice is one of many examples of contrast in this pamphlet. “The Three Crows” in particular is a study of extremes: darkness juxtaposed with light, childhood with maturity. The nostalgic qualities in this poem shine through with the opening mention of “a nursery rhyme” and the playful alliteration of “dip and dive / like the sudden swerve of fortune flown / comes a flash of colour”, and having these light-hearted lines set alongside such phrases as “the three that swooped / between sandstone tenements / like harbingers” results in an intriguingly dark narrative with an innocent twist.

These collected poems each show a different version of the titular raven. This bird is portrayed as both villain, for instance in the ominous opening poem “Forecast”, and also victim, such as in the intriguingly titled “”. The latter poem is an alternative take on the story of the first intentional journey to Iceland by sea, which tells of a Norwegian sailor who took three ravens with him on his ship in an attempt to better navigate on his voyage. Telling this story with the inclusion of the vengeful mother of the three young ravens provides a fresh new perspective on the ancient tale. Paul is heavily influenced by folklore from many different cultures, and her passion for this subject comes across strongly.

One of the overarching themes in The Raven’s Song is travel and migration, and this is reflective of Paul’s own life. Born in India, she moved to Canada as a child, grew up in Vancouver, and then spent the larger part of her adult life in Scotland, where she currently resides. The imagery presented in this collection, in particular the symbolism of the raven flying “over oceans and mountains” and “past rocks and sea cliffs” implies adventure and exploration across immense distances, indicative of Paul’s travels throughout her life and the vast differences between the places that she has lived. There is an indication that the idea of a place to call home is something very important to her; the penultimate poem, “Beginning to End”, contains the beautiful stanza “You leave a nest, but the moss and dead / twigs that were your bed live inside, / no matter how wide the world stretches” – a view that surely strikes a chord with everybody. These poems have a sentimental quality brought on by themes of home, family unity and storytelling, and these themes are what define The Raven’s Song as a collection. It is an oddly mesmerising read that successfully humanises the bird, which is not presented here as an ill omen, but a parent, a traveller, and a reflection of both the good and bad that exist within all of us.