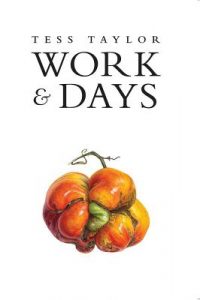 “But why linger? Why stay in this world of oak and tree and rock?”

A quote from Hesiod’s Theonogy opens Tess Taylor’s collection Work & Days. The poems that follow – described by Taylor herself as “latter day Georgics” – serve as poetic responses to a series of questions: What kind of world do we live in? How does one find beauty in a world beset by social and political problems? Taylor’s poetry raises larger questions which are in need of urgent responses, while also records her personal struggles with nature and society.

The collection spans an agricultural year, ploughing through the seasons and ultimately exposing the weeds. Her time working on a farm in the Massachusetts Berkshires enables her to reflect on the world of technology she absented herself from; her focus on the micro, menial tasks of the farm impart, as it were, her a clear and thoughtful macro view of how we are to live. Her poetry is filled with admiration for the positivity and growth which working close to nature allows her to have.

The first poem “Peck small tracks” creates a link between pen and plough, which may seem unlikely. However, as you read on, this seems like the most natural connection in the world. “The page awaits”, she declares, raising anticipation, and closing the gap between agriculture and poetry; a gap which I’d thought previously to be much larger.

Tess Taylor is a refreshing find in a Georgic poetic terrain filled with male writers. Taylor takes what could be considered a masculine ‘field’ (excuse the pun) to explore ideas from all areas of life, including war, health, economy and the body. The collection’s cover, a brilliant white background with a bulbous, deformed fruit or vegetable foregrounded, shows clear signs of juxtaposing themes. The image at once suggests growth and health alongside corruption and imperfection: images of ripeness, fertility and new beginnings are companion to themes of social decay and loss.

The variety and weight of subject matter could have made Work & Days over-ripe, full to bursting, ugly. However, the collection is lifted by a hopeful tone throughout. Taylor is not offering a simple critique of our society, rather she is an example of the poet as a watcher, attending to the world around her. The sense of self is apparent, and yet her stark awareness of poetics, biology, and sociology (to name only a few) transcends the personal. This hope can be seen clearly in the final poem ‘Epilogue’, which ends with an optimistic plea:

We bow to the work:
Same & not same – our scattered arts –

removing, removing the stones from our soil.

The repetition and incantatory tone result in some religious undertones. The biblical cadences, which show Taylor’s passion and devotion to reforming society through an active relationship with nature, also bring the issues into perspective: they are age old, and all-important.

The thematic multiplicity is mirrored in the fragmentation of form. On the whole, Taylor favours short stanzas, with plenty of white space, perhaps odes to the “headspace” the agricultural journey of a year has allowed her.  Often, the breaks are regular, not unlike the even plough lines of the field. In other poems, such as “High July”, lines jump and wobble around the page irregularly, creating a dissonant jumble of word and thought. These poems are often the most effective, as the recreate the tumultuousness of the modern world.

The result is a textured and sensual collection which, with the declaration “This is my time on earth”, wills us to go outside and soak up the beauty of the natural world, despite its industrial and political downfalls. This is poetry which lives and breathes on the page, turned out of the very earth she works on.