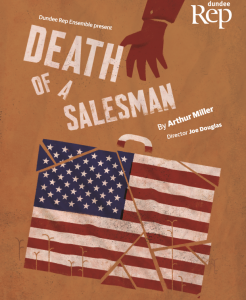 Death of a Salesman by Arthur Miller is widely considered one of the greatest plays to come out of the 20th century. Premiered in 1949, it is a tragedy that examines the demise of a working man and how society, along with the character’s own delusions, can torture a weakened soul. When my MLitt class met Joe Douglas, Director of this production and also Associate Artistic Director at the Dundee Rep, the cast were deep in the rehearsal process; Joe did admit that it was “a very big play” to take on. He needed not have worried as respect for the material has clearly inspired him. The resident Dundee Rep Ensemble has staged a very fine production.

The performance area at the Rep lends an intimacy to the production that some venues lack and on this occasion serves this piece particularly well. Trash burners that gently smoke throughout the performance are placed around the wings to give the impression of a city that has closed in upon Willy Loman. In amongst these, live incidental music and vocal interjections are done by cast dressed in black with woolly bonnets like tramps huddling in to keep warm, and serving further to render a vivid impression of a City encroaching. Otherwise the set dressing is simplicity itself and is all the better for being so. The use of imitation soil to cover the entire stage except the main central platform and the upper bedroom area is also remarkable in its effect of drawing us in and promoting a sense of realism.

Of the individual performances Billy Mack, playing Willy Loman, succeeds in holding us transfixed throughout. The performance and direction make real his spiralling dementia and carry the audience through the transition between the present and a past that is the product of Willy Loman’s mind seamlessly. Even the scenes that blur the two that could easily be mishandled were very well managed and the audience remained enthralled throughout. The supporting cast in the shape of Ewan Donald and Laurie Scott as Biff and Happy, Willy’s errant sons, do faultless work in maintaining commentary on the downward spiral of the central character. Special mention should also go to Irene Macdougall, playing Willy’s wife Linda, who succeeds in adding a realistic and concerned melancholy regarding Willy’s predicament.

Arthur Miller’s original direction was that the “imagined” walls of the house should only be crossed over by cast in the ‘unreal’ flashback scenes, otherwise they should always use the open doorframe usually provided. The fact that this production does not adhere to this instruction is forgivable as it seems to open out the performance for the audience, and militate against a restriction of movement that would have been very limiting onstage. The use of reverb through stage side microphones adds an otherworldliness to dialogue that, in Willy’s mind, harks from the past. Then there is the unusual direction of Ben, Willy’s deceased brother, who appears through a portal to another world that only he currently has access to, and takes centre stage on high in the bedroom area where traditionally he would appear in the yard to the side. All these aspects add originality to this production.

The performance overall held me throughout and I was totally convinced by Willy’s struggle with the forces within his mind. The production was not without fault, Biff and Hap’s microphones needed the volume turned up initially as their dialogue in the high-up bedroom area was initially swallowed by the auditorium, and the scene later on where Biff gets very physical with Hap and Willy was a little too hands on. But this was a preview – these minor technical issues would no doubt be ironed out.

The Dundee Rep have succeeded in doing absolute justice to an old favourite and, when dealing with such a beloved play as Death of a Salesman, I can think of no higher accolade.