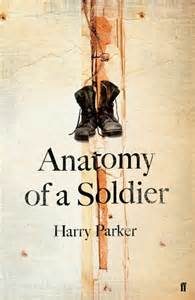 Anatomy of a Soldier is the debut novel of Harry Parker. He joined the British Army when he was twenty three and served as a Captain in both Iraq and Afghanistan. You would be forgiven for thinking that an adventurous tale of derring-do would fit this profile, but in this book the author should be lauded for taking a more difficult road that is far less travelled.

Throughout the novel we see Captain Tom Barnes how he is, how he was and how he will be. He is a typical Platoon Commander who could have been plucked from any conflict since the Second World War. He was the recruitment poster ideal of a dedicated soldier and officer devoted to duty and his men. He will be left paraplegic and mutilated by an Improvised Explosive Device (IED) in Afghanistan. He will wish he had died in that explosion. He must now reconcile his past with how he moves on physically altered forever.

The story is told from the point-of-view of inanimate objects that either have a direct involvement in the unfolding situation or have an association that can be telling. A tourniquet; a pair of boots; a bag of fertiliser; a bicycle and a catheter, along with forty other objects – all give the author a unique viewpoint that could not ever usually be expressed, allowing him to artistically exploit their occasionally intimate perspective. These objects do not have a judgemental opinion so political, ideological and emotional bias are removed. This, I feel, is a conscious decision by Parker to promote detachment which perhaps he needed to tell the story. In adopting this approach this book achieves what most other accounts of this type do not. It feels real.

The situation depicted is typical of that encountered in Afghanistan by infantry units at ground level every day. The personal relationships that the soldiers attempt to forge with the locals are fraught with suspicion. Insurgents meld with ordinary people who cannot give them up for fear of reprisals, or who are also likely to related to civilians through family or friends that cannot reconcile the ones they love with extremism. It is almost impossible to tell the guilty and the innocent apart as situations become fluid. The story depicts these little betrayals skillfully with an authentic truth and aggregates them into the true hopelessness of these scenarios as inevitability plays out. Structurally the story intersperses chapters regarding the build up to the IED incident with the episodic treatment of both the initial trauma and the ongoing recovery. These are ordered to juxtapose the situation Tom faced in both the aftermath of his life being irrevocably changed from what he did everyday previously. It is interesting to note that when in uniform Tom is referred to as BA5799 which is a personal identification number made up from the first two letters of surname and last four digits of an army number. This is known as a Zap Number. Use of a reference serves to objectify him prior to his injury and afterwards; when he has to become Tom again, he has to regain his identity along with his physical struggle to recover.

From 2001 to 2014, out of the 7,436 admitted to British Army field Hospitals in Afghanistan, 616 were notified seriously injured and of those 240 personnel had to be given amputations. This book presents a very realistic and believable insight into what some of those service personnel may typically have gone through. No prior armed forces knowledge is required; in fact you will get much more out of this book if you do not have any prior knowledge of the army. This is not just another tale of British soldiers in Afghanistan. This is a story of a struggle that continues long after the fading of the battle’s din. This is a story that is essential.