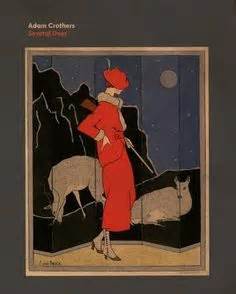 It is a striking image – that of Jan Van Brock’s engraving “Woman in hunting dress” – which adorns the cover of Belfast-born poet Adam Crothers’ debut collection. Behind the elegant, shotgun-carrying woman, a pair of deer sits placidly on a moonlit night. Only on looking closer do you notice the folds etched into the background and realise that the woman in red is walking past some kind of folding screen. Crothers’ poetry too has a way of inviting you in with the familiar, only for it to change into something altogether more unsettling.

A glance at some of the 70 titles, hint at some the games being played. “Deadication”, “Animal Testing, Testing” and “Just Dropped In (To see what condition the Human Condition was in)” are clearly not the work of someone who takes themselves too seriously. Yet a very definite attentiveness to form –poems constructed from series of couplets feature prominently – and inventive use of rhyme (how about “birds sing” and “worsening”) show a poet very deliberate in their craft. The poems are steeped in culture both high and low, with references to Tennyson, Robert Herrick, Robert Frost, Barrack Obama, Kanye West, Austin Powers and the musical Grease scatter-gunned throughout. Crothers also shows great delight in taking stock phrases and clichés and running with them, often to interesting effect. The opening poem “My Usual Flair” tells us:

…when in a roman
I do as girls do…

Now let the sins of the son be visited upon the father. Every son,
But my father specifically.

But while I found myself smiling and nodding, I did start to find the relentless pace of the poems little wearing. In the first of three sections in the book, Crothers often seems determined to cram as much into a couplet as he can, which can also be hit and miss. Another criticism I might have made is qualified by the fact that the poet himself describes his poems as “quite self-aware”, contradicting and undermining themselves “in a way that reflects, I hope, the inner workings of the human mind.” The poem “Matthew” is a good example of this, declaring:

I can tell you that I am very well informed. I write no sonnets;
do not attempt to second-guess me. For ‘no sonnets’ read ‘one sonnet’[.]

I have to admit though, that I did find the metatextual, poetic self-awareness, all washed down with lashings irony, just a little overdone.

The poems in the second section seem not to be trying as hard, and as a result, they achieve more. “Cradle Song” is gently evocative as if we are discovering senses for the first time:

You would taste tamarind, and you would know
The leathery cool of whiskey, the give
Of a door opened correctly[.]

The poem “Resounding Success” is wistful about a failure to restring a guitar even as the narrator’s seduction succeeds. “From in here” is a very visceral description of a painter and his work. “On balance” borrows a metaphor about a young boy’s singing voice from another Cambridge University poet and develops it, to great effect.

Crothers is a poet who clearly loves the sound of words and has great awareness of the sensations that they can evoke. I imagine that hearing him read from his work would be an intense experience, as some of them feel positively incantatory. His irreverence is backed up by a thorough grounding in his art. It is difficult not to smile at a poem “Down the Ringing Grooves”, written “after Tennyson”, kicking off with the Kanye: “I aint saying she’s a bonedigger”. But in the end, I felt that I was not always seeing what lies behind the cleverness, the strangeness and the layers of irony. And perhaps that is the point.