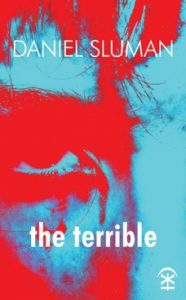 Daniel Sluman’s poems hold suffering. They cover uselessness, frailty and anger both resolved and unresolved. the terrible doesn’t pander or pussyfoot, it reverberates with the poet’s confessions and rings vividly. This, Sluman’s second collection, follows his 2012 debut Absence has a weight of its own which was released to critical acclaim.  The poet has held multiple editorial roles including one in the award-winning disability anthology FTW: Poets against Atos, and he is indeed an impassioned disability rights activist. Poetry focusing on disability is a subject category I never realised I had not read, and Sluman’s treatment of it is so gentle that I could have still missed the gap. As the title suggests, the terrible is about just that. “winter” houses exhaustion, “human/beauty” covers chaos, and “ouija” encapsulates the need for belonging; for someone “to need to love me   to love to need me as I am”. Daniel Sluman writes his experience with disability, treating it as an integral facet of himself rather than his entirety. Not so much a cause of the sadness or anger, or any of the other passions occupying his words, but an unescapable reality.

The collection is divided into three sections: “every window in the world slams shut”, “the terrible” and “further towards the stalling heart”. There are no discernible topic differences between these three, although there is a movement of abstraction as the collection progresses. The first section tends to address somewhat universal scenes of everyday pains and anxieties, the second centres on the poet’s memories while the third travels further inwards towards the poet’s specific physical troubles. These are crude categorisations for the collection is tightly conducted in its tone and subject matter so much so that the first and last poem could sit side by side and still interlock. Throughout the terrible, a subtle motif of fire, seen mainly in cigarettes and struck matches, brings to mind beat-generation writing. Though many young writers don’t focus on it, Sluman grabs at the anxiety of his age.

We only have poetic structure for punctuation. From the title onwards, Sluman ignores capital letters, commas, colons and the exclamation mark. Punctuation becomes superfluous. There is so much colour of expression in his work that arguably such formal markers would undermine the tone. The movement of his language, the pacing, the sound, the odd word punching its way into the rhythm stammer, infuses his writing so that you become, by default, an expert performer and listener of poetry.  So pared down is his language that many of his poems can only truly be read one way:

but the image was interrupted by his grunts
as the dahlias turned in on themselves in disgust
the hole-punch moon    mute    as you stared[.]

While the spacing between “moon” and “mute” and “ “as” is identical, the alliteration in that last line gives the former space a felt extension. To make your lips mouth moon then mute is an effort; putting these two words together stalls reading. Especially in poetry when you are likely to pronounce words with more care that you would with prose, that lag does not go unnoticed. The guidance his writing gives is near directorial.

There is no real catharsis, and no happy ending lines in Daniel Sluman’s the terrible. He doesn’t tackle the terrors of life overtly because he is already too familiar with them. You trust him with the pain he writes of and you leave with his suffering. And yet his words leave you the better for it.