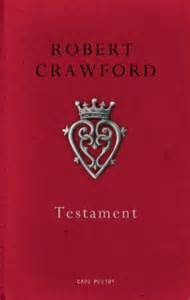 All I want now is my dignity back,
To stand on my own unsteady feet […].

Testament is Robert Crawford’s seventh full length collection of poems, and here he writes about a myriad of themes in many different styles. Made up of forty-two poems, Testament is divided into five distinct sections; “Hard-Wearing Flowers”, “A Little History”, “Greik (eftir Cavafy)”, “The Marble Quarry”, and “Testament” itself. The Scottish critic and academic’s poetry flits from topics such as romance, to Biblical studies, and on to the Scottish Independence Referendum.

Odalisque, so pendulous and slim,
As I nibble and lick your oxter […].

The collection starts as it means to go on. This language continues throughout the text – suggesting romance with beautiful flowing images, mostly of the body, and intercutting these with surprising choices that can give a jolt of acutely physical realism not always seen when love or sex is related in poetry.

Similarly, Crawford does not shy away from politics in Testament, the collection featuring an entire section of poems about the Scottish “neverendum”, a phrase which was coined in various places in the media and which he uses to good effect in“Pole Dance”, one of the shortest poems in the book. At four lines long, its snappy length only magnifies the after-effect of reading about being “almost there” with regards to that very independence.

Testament features several poems in Scots. Some are given full translations; with others a glossary of key words is provided so any non-Scot (or even some Scots) can accurately decipher meaning. The use of Scots claymores home Crawford’s point that Scotland is a separate nation in the United Kingdom, a notion that runs throughout the collection.

It is not just a simple English and Scottish divide in language that is highlighted. There is poetry here, written in Scots which is translated from Greek poetry originally written by C. P. Cavafy, and in the final section of Testament Crawford has included reworked passages from the Bible. He cherry picks emotional and educational passages such as “God Save The King”, a retelling of the Crucifixion:

Then hoisted their bloody King
All the way up
His tall cross.

These translations and re-workings place the poems in the present day, and give them a contemporary flair that make it accessible to even wider audiences, and perhaps even those who are not religious themselves. Each poem embodies a patriotism that seeps right through the page. And if you are lucky enough to have not suffered a loss, from Crawford’s verse, you can still understand the emotional turmoil of death.

Although they are all roughly one page long, Crawford’s poems are not all similarly structured; some have one word lines (“Mop”) while others are more rigidly formal, with lines and stanzas of equal length (“The Bannockburn Compass”). Jumping from topic to topic may at first be puzzling also. You may ask how romance, politics, death, and religion are related. The answer is of course that these subjects are all ultimately human.

Not only does Crawford’s sharp wit and effervescent description enrich each theme these techniques touch, but these twin qualities also run through every piece in the text to pull them together in a tight knot. Or perhaps those threads are wires, and are really metal, for these poems are linked together like a Luckenbooth brooch.