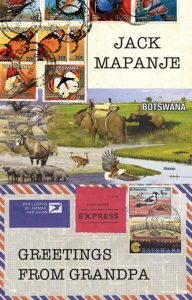 What strikes you immediately with Greetings from Grandpa is Jack Mapanje’s voice.  The poems have a directness, as if the poet is speaking straight to the reader, plainly and conversationally.  Poet and reader in the same room.

Mapanje is a Malawian poet, linguist and human rights activist who was imprisoned from 1987 to 1991 by Hastings Banda’s government, and then forced to go into exile.  He now lives and writes in York, and teaches Creative Writing and Literatures of Incarceration at Newcastle University.  Greetings from Grandpa is his sixth poetry collection.  The poems are written in free verse, with short run-on lines that pull the reader along at speed.  Visually, there is a tidiness on the page, with each poem built of blocks of lines of the same length, often one long stanza.  Others are broken into couplets or triplets, but with a free use of enjambment.  The forward motion of the words carries the reader’s eye with its own confident momentum.

In this collection, poems set in Malawi, Botswana, Egypt share pages with poems set in Luxembourg, Sunderland, Welwyn Garden City.  Poems about celebrations – moments to be marked – births, weddings, farewells, anniversaries of things good and sad, are cheek by jowl with poems of outrage and horror, the daily darkness of politics.  Bureaucracy, corruption, stupidity, greed are as much the stuff of poetry as birth and love.  For example, in “Some Anglo-Deutsch-Malawi Wedding!” Mapanje shares the joy of an exuberant, cumbersome, exhausting layer cake of customs wedged into a single long-drawn-out celebration.  And on the next page, we are slapped in the face by the poem “Watching Palestinians Being Butchered”.

… what kind
of war is this that must go on and on while
the rest of the world looks on, befuddled?

The whole world is the exile’s home, but there is a constant current of Africa in Mapanje’s voice.  In the title poem, “Greetings from Grandpa”, he writes

I am sending you a poem
that relates and leaps like
the pelican on Okavango
Delta, leaping from green
water lilies to brown floats …

But he doesn’t indulge in misty romanticising of the lost home.  In “Farewell to the Mopipi Tree”, he praises

… the candid mopipi tree of
Gabarone Main Shopping Mall, flouting
the heat-waves as blackbirds, swallows,
finches flutter among the branches while
the pigeons coo, lizards and squirrels dash
about their diamond lines …

The final third of this collection is a single, longer poem, a retelling of a legend shared among the Yao-speaking people of Malawi, Mozambique and Tanzania: “Kalikalanje of Ostrich Forest“. The first canto of Mapanje’s version offers the reader a number of stories of the hero’s birth, and then concludes:

the tale of my birth, the birth of
Kalikalanje, God’s already fried

diminutive, are legion; and if some
should acutely contradict others,

that’s the spirit of my tale …

I take the word of the back cover blurb, that this story has “symbolic, social-cultural-political nuance … especially relevant in today’s world of persistent liars and impostors”.  However, I found myself siding with poor, stupid Lisimu the vulture, whose actions make no sense and are doomed to failure, over the mocking laughter of the mob of boys led by the hero of the tale.  I have a knee-jerk reaction to the arbitrariness of folk tales, and so am not a fair judge of this longer poem.

What you come away with from this collection is a sense of exile that is open to the new without deserting the old, that includes despair and loss, and transcends them.  As the poet puts it in “Imagining Home”:

… doesn’t chameleon
wear the colours of his
adopted twigs, doesn’t
snake crawl back to his
pit of origin, eventually?

In Mapanje’s voice, there is always hope.