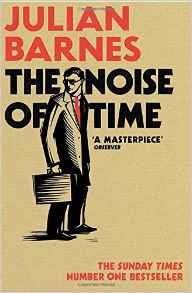 One to hear
One to remember
And one to drink.

The quietness of this little novel, The Noise of Time, is its weapon. Inside a jacket which shouts its title in blocky text and sings the author’s praises, a story is whispered covertly to the reader in snatches of non-linear narrative. This fictionalised biography of renowned Russian composer Dmitri Shostakovich’s life in Soviet Russia is constructed with a military precision; its messages about art, destiny and integrity to ring in the ears like the protagonist’s synchronised, chiming clocks.

In stand-alone, discordant paragraphs, the jangled thoughts, memories and anxieties of this fictional Shostakovich swirl around us as we watch him waiting by an elevator – waiting to be taken away to the Big House. Like sunlight through the slanted blinds of a forties noir, slats of white space interrupt the fully justified blocks of text, and we are nervous. Everything about this book is shifty.

Stood still in a triad of tight, enclosed settings – the elevator landing, the aeroplane and the chauffeured car – we, like the protagonist, are at the mercy of his interiority. Told in a third-person which is so intimate that the third person becomes jarring, Dmitri’s life is laid out before us: his lovers, his music, his overbearing mother, and above all, his cowardice. As his music is banned or unbanned according to Stalin’s whim, and his fellow musicians and friends mysteriously disappear one by one in the night, our protagonist finds his neck enclosed tighter and tighter by the Party’s noose; his art, he realises, does not “belong to itself” anymore. Desperate to protect his family, Shostakovich finds himself in a paradoxical prison of selling out his integrity in order to stay in a life he does not want. The heroism of continuing to live in fear for his family’s sake is shot down by his placation of Stalin’s regime, renouncement of his own art, and eventual loss of all self-respect. Too full of loathing for himself to even commit suicide, Shostakovich lives a long, empty life of withering away in the eventual favour of the Party he so despises. But it’s not all as gloomy as a Stalin-period tale sounds; our Shostakovich loves irony, and there is plenty of that.

And there is humour, black as it may be. Peppered with translated Russian figures of speech, even the most tragic moment can be met with an absurdist quality that makes the reader bark out a short, derisive snort at the state of things:

Dmitri Dmitrievich Shostakovich has joined the Communist Party of the Union of Soviet Socialist Republics. It can’t be, because it couldn’t ever be, as the major said when he saw the giraffe. But it could be, and it was.

However, this darkly funny tone never approaches cynicism, and this is where the novel truly wails. There is a deep sincerity in both the character of Shostakovich and the writing itself, which, although not opposed to pessimism, rejects cynicism entirely. In one a rare piece of direct speech, the protagonist’s feeble defence of his work echoes the tragedy of a wholly suspicious nation:

It always seems to me that when I write sincerely and as I truly feel, then my music cannot be ‘against’ the People, and that, after all, I myself am a representative…in some small way…of the People.

In its repetitive, lulling prose, this deeply ironical work meditates on corruption, integrity, cowardice, love and freedom, and the ways that these words can all reside within one contradictory person; one contradictory nation. The words of the story are projected into the paranoid head of Shostakovich, but he in turn is projected onto history, onto memory. In a time where facts are alternative, corruption is in the bones of honesty and dictators are elected, this novel, a symphony without crescendo, orchestrates the urgency of being not the one who hears, but the one who remembers.