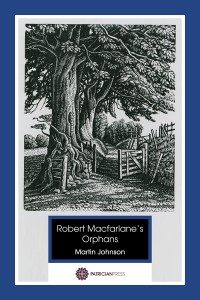 The subtitle for Robert Macfarlane’s Orphans is, intriguingly, “Poems borrowed by Martin Johnson.” The collection started life as a public challenge to writer Robert Macfarlane to “release the poetry that lay undiscovered in his prose.” When Macfarlane declined the task, Johnson took it on. The back cover offers a precedent for Johnson’s proposal:  “Edward Thomas, a poet loved by both writers, was inspired by Robert Frost to do the same with his own prose writing.”  From time to time, like many of us, I have also experimented with “translating” my own prose into poetry, and vice versa.  It’s an interesting exercise.  With me, the process has always worked more convincingly when the poetry moved into the prose, but I was intrigued to see what Johnson’s “literary experiment” in the other direction might produce.

Robert Macfarlane’s Orphans is a kind of sequential collaboration – a trail of inspiration, where ownership of the words becomes hazy.  The collection is divided between work drawn from Macfarlane’s The Old Ways (Hamish Hamilton, 2012) and his Landmarks (Hamish Hamilton, 2015), with one of Johnson’s more independent poems – “The Broomway” – tucked in-between (though this also acknowledges a debt to The Old Ways).

“As midwife to these poems,” Johnson writes, “I would recommend they should be read before the prose extracts from which they derive.” (p. 13).  I tried both ways.  For example, following Johnson’s suggested approach, I read these lines:

Sky black, trimmed with grey:
rain on the way.
A lapwing turned and tumbled overhead
Making for the coast
With wireless bleeps and twiddles.

which had emerged from: “The sky was black, trimmed with grey: rain on the way.  A lapwing turned and tumbled overhead, making for the coast, letting out wireless bleeps and twiddles.” (The Old Ways) Or, starting with the prose, I read the sentence: “So it was down, steeply down, across shale slopes, the stones of the path flowing in the sunlight, the horses skidding on their front hooves, braking with the back hooves …” (The Old Ways) which became:

So it was down, steeply down,
across shale slopes,
stones flowing in the sunlight,
horses skidding on front hooves,
braking with back hooves …

It’s up to the reader, of course, whether they read the poetry or the prose first, but I preferred starting with the source material and moving on to what Johnson did with it.

Having previously published works on education, this is Johnson’s debut collection of poetry.  He uses a free verse form, which moves well from the prose source.  With the exception of “Miles to Go,” Johnson’s preference is for capitalising the beginning of each line, producing what feels to me like an uneasily emphatic thump.  (There are period lapses from this pattern.)

The cover image is a beautifully-executed wood engraving by Howard Phipps, called “A Green Lane.”  As I read through the book, however, it seemed only marginally illustrative of much of the content, and didn’t, for me, speak to or of the process being explored.  I can’t quite think what cover image would do that, but it could have been a fascinating artistic challenge.

In the end, am I convinced by this collection of what Macfarlane himself describes in a letter to Johnson as “fossil poems … prised from the strata of my paragraphs”?  When it came down to it, I fluctuated between feeling perfectly content with the original poetic prose, and enjoying the way the words inhabited the white space of the poetry page.  As a poetry reader and writer, I preferred the poems.  As a prose reader and writer, I preferred the prose.  Either way, Robert Macfarlane’s Orphans offers an exploration of an interesting process.