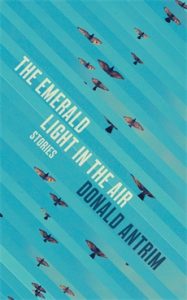 If the purpose of a collection of short stories is to showcase the style and talent of the author, then The Emerald Light in the Air by Donald Antrim is an enormous success. All previously published in the New Yorker over the space of fifteen years, these stories offer a delicious coverage of the author’s career, and his unflinching and bare-all exploration of humanity.

Antrim’s style is perhaps best summed up by Chris Power, in The Guardian: “precise, uncluttered, and is capable of creating a vivid sense of place…” This is a perfect way to describe Antrim’s preference for short sentences and unambiguous turns of phrase. Yet, this is not to say the stories are simple as evidenced by the collection’s complexity of characterisation, the multitude of intertwining themes and Antrim’s striking ability to set a scene.

The opening story “An Actor Prepares” follows drama teacher Reg as he prepares to stage a production of A Midsummer Night’s Dream.  A prime example of Antrim’s ability to cultivate a multi-faceted and deeply compelling character in only a few pages, this story highlights the author’s expertise in the writing of humour. When Reg casts himself as Lysander, across from a pretty teenage Hermia, he tells the reader: “What would a skinny, balding, unmarried, childless 46-year old Lysander – a PHD with hair on his back – mean within the context of an otherwise college-age show?” Though this opening story has you chuckling with its insightful wit, the surrealism of its carnival-like antics (a blind ‘Puck’, a fearsome duck, an alcoholic girlfriend and some marijuana (to name a few)) can leave the reader slightly bamboozled.

As the collection progresses, there is a movement towards realism. Antrim’s humour and irony is still present, but the stories adopt a more serious tone. The opening to the final story, “The Emerald Light in the Air,” which gives the collection its title, gives us a sense of this:

In less than a year he’d lost his mother, his father, and as he’d once and sometimes still felt Julia to be, the love of his life; and during this year, or, he should say, during its suicidal aftermath, he’d twice admitted himself to the psychiatric ward…

The unusual – for Antrim – long and anecdotal first sentence allows the reader to follow the thoughts and torment of the protagonist, revealing his raw humanity without succumbing to over-sympathetic or emotive style choices. As the collection increases in sobriety, there is a building of pressure and intensity, feeling like – as is mentioned in the final story – a storm is brewing.

The protagonists throughout The Emerald Light in the Air are troubled, imperfect and each suffering in his own way.  The interiority of the stories creates a claustrophobic feel and as the characters unravel, Antrim approaches mental health and alcoholism in a raw, insightful way. The collection is held together with a heart wrenching common thread of depression and sorrow, handled with psychological diligence. The characters smoke, spend, seduce, and swallow their way through the narrative, trying to ameliorate their feelings of depression, anxiety, and heartbreak.

Antrim deals with relationships in the same honest way. In “Another Manhattan”, where a mentally ill and increasingly erratic protagonist is defeated by a bunch of flowers, the narrator admits, “They had lied to each other so many times, over so many years, that deceptions between them had become commonplace, practically repertoire.” Couples are struggling to survive throughout The Emerald Light in the Air. There is no romanticism –   we would be left dispirited if it wasn’t for the lift of his comic genius.