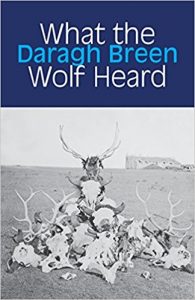 Shadows dart throughout What The Wolf Heard; “skeletons” confirming the collection’s theme:

their heads turn slightly
in a synchronized intensification
and lock on something
just out of our vision.

Daragh Breen’s poems are crowded with spirits and ghosts, their very ethereal nature characterizing his focus on the almost indefinable. Published in 2016, What The Wolf Heard, is unconventional in how it explores and illustrates time. Structured  as four compartments, the collection’s chronology is nonlinear and consequently, implies a fluidity between present,  past, and future. The introduction is set in 1969, continues “four decades earlier,” and announces its completion, “23 years later.” Throughout, Breen addresses the process of nothing transforming into something in order to replace the something that has now returned to nothing. What The Wolf Heard decodes is the continual, metamorphic cycle of nature, from birth to burial.

Section one, “The Lighthouses” inhabits a sense of an open and accessible perpetuity through the imagery of water. Here, the italicized, concise details about a specific lighthouse on the coast of Ireland are printed on the left page; on the mirroring page, a lyrical response follows. “And on and on it  pours, pouring on and on. On and on…” Forceful, yet free, the ocean flows around and away; approaching Breen’s Lighthouses, crashing on  their shores before surging on. Water, a symbol of both life and death, is thrust in between the Lighthouse, itself a symbol of the former, and the rocks, a representation of the latter. This is in keeping with his portrayal of time. Humanity continues in its natural course of nature. What The Wolf Heard focuses on the birth of new life as a replacement of the dead. Consider the repeated motif of ghosts. The “ghosts come ashore” after the storm, after death.

The poet expounds on this less than traditional form of “rebirth” with a detailed focus of Metamorphism. For example, the poem describing “Skelligs“, depicts how the “storms off-shore constantly shed their skin of waves.” Breen’s taut use of language impacts powerfully on his images. What The Wolf Heard engages the imagination by repeating words and phrases. For example, “Summer Solstice” starts with, “The first river died that June,” implying that there will be at least second river at risk. The strongly seasonal aspect of time is developed; consider “The Meat Factory” which transitions from late autumn to winter and eventually, spring.

The third section of the collection is a self-contained “Requiem for Ned Kelly,” the celebrated Australian outlaw. This section of the collection is followed by “IV. Sun King.” Inside, “II Tabernacle” reads: “These sunsets let the beasts know that we are about to be released from winter’s labyrinth, and led stamping into the new storm-light.” With unhindered starkness, Breen’s conveys the seasonal cycle as a metaphor for rebirth. Winter is the end of the year, yet, it is not the end of life. Days, decades, and centuries continue on as always; the sun rising and setting in continual succession.

Yet, I have seen you now as a man,
a youth, and a young boy, […] when all our collective
years have slipped from us, drip by slow-slow drip.

By reversing the stages of growth, the poet is successfully closes his collection with the cyclical and seasonal energy which has hallmarked the whole sequence. Although these poems often prioritise darkness, damage, and death, this last line leaves readers with a promise. “In the universe’s still dark silence, the spaces where we sat or walked or talked,” in “hollowed-out ghost forests,” our legacy “will remain.” What The Wolf Heard offers is a reflection on life, and a questioning of its finality.