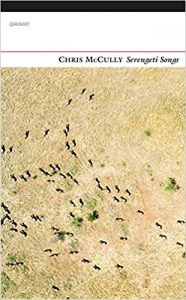 Ardent angler and Yorkshireman Chris McCully has followed a long and fruitful career in academia both at the University of Manchester and in the Netherlands.  Born in Bradford in 1958, he now resides in Colchester where he researches English poetic form and metrics at the University of Essex and publishes in a range of genres in addition to poetry, including journalism and environmental literature.

Serengeti Songs presents a collection of poems and black and white photography, predominantly produced by the author himself, which together encapsulate the vivacity of an ever-changing and evolving landscape.  The Serengeti is the largest and oldest ecosystem on Earth, and one of the most bio-diverse in regards to avian and mammalian species.   Spanning northern Tanzania into the Maasai Mara of Kenya, constant mass migrations roam across the myriad of savannah, swamp, forest and volcanic landscapes.  Throughout this collection, McCully travels alongside the reader like an avid visitor through this sinuous and ever-changing world.  Indeed, the very cover of Serengeti Songs introduces the liveliness of this region with an aerial photograph of the movements of a herd of wildebeest, of which there are over a million in existence there.  The tracks of prior migrations can be seen winding their way across the page, alluding to the fluidity of the populations of this manifold ecosystem and of the poetry held within the book.

Serengeti Songs encompasses the resonance and rhythms of the landscape and its inhabitants and collectively provides a holistic insight into the beauty and savagery of life there.  The collection opens with “Rains”, a short piece which perfectly describes the migration of masses of water that also typify this region.  The welcome quenching of the deathly arid plains with a deluge is communicated eloquently: “Pasture grows back to green from blood.”

The Serengeti is indeed an unforgiving landscape, and the lives of the creatures that inhabit it are inextricably entwined within the geography and climate of the region.  McCully appears to have intentionally interspersed poetry describing the weather patterns and terrain of the Serengeti with the many species he depicts; the reader therefore feels as both immersed within the landscape and at the mercy of its turbulent toils.

Amongst the description of the harsh reality of life there, the poet has also provided the reader with many an opportunity to smile and laugh.  The little piece entitled “Impala Sonnet” for example depicts a muddle of letters and alliteration formed from the word “impala”.  This reminds the reader of the confusion of visually trying to decipher individual antelopes within their immense herd of black-and-white striped rumps.

The black and white photographs that accompany the book’s poetry provide an intimate view into the lives of the creatures described.  Along with the written words, the photographs allow the reader to peer in and discover the behaviours and quirks of wildebeest, lizards, lions, storks and even the parasites of the plains.  At the rear of the book the author has embellished each poem with a description of its subject; zoological notes, historical details or information about climate and human impact.  Also included is a piece entitled “The Snows of Kilimanjaro”, a narrative on the discovery and exploitation of Mount Kilimanjaro by Man, particularly those from the West.  It describes this volcanic peak as a sacred place of mystery and intrigue, and of death, destruction and exploitative tourism.  McCully chose not to venture to the mountain’s summit, and having read his ardent account, I feel I may not also.

The information, photographs and poems of Serengeti Songs collectively form a detailed narrative; they sing its delights and turmoils from each page.  Long after the region succumbs to anthropogenic destruction I feel as though this book will read like a nostalgic biography of one of nature’s most exquisite wonders.  McCully has at the very least succeeded in whetting an appetite to visit the Serengeti and witness its innate vibrancy and vivacity before it is too late.