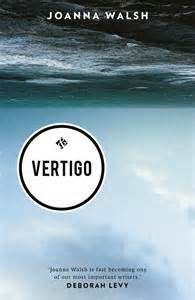 “It is cruel to expect me to be both mother and daughter – such different expectations.”

Joanna Walsh’s new book Vertigo (a collection of short stories would be an equally apt description) offers a series of glimpses into the life of her protagonist. She is a mother. A child. A wife. A lover.  Walsh portrays womanhood as a tangle of responsibilities, expectations and relationships that can all lead to a degraded sense of belonging. The title is explained by the narrator: “vertigo is the sense that if I fall, I will fall not toward the earth but into space. I sense no anchorage.” Walsh’s exploration of the multiplicity of identity is both bold and sensitive. Vertigo urges a deeper understanding of the self-dissonance which often accompanies the vertiginous aspects of daily life.

Each section in Vertigo is a flash of narrative, which the reader must thread together to form their own impression. Despite this fragmentation, an overarching loneliness haunts the narrative. Walsh explores themes of detachment – from people, from herself and from what is going on around her, in an interior monologue styled voice. The protagonist and narrator – because to have only one role would defeat the point – is faced with a myriad of external stimuli; but the vast movement in setting and circumstance is met with an astounding solipsistic focus on the self. This self-indulgent narrative is rich with poetic techniques and nuances, for example the interchanging use of pronouns, self-correction, anecdotal episodes and a saturation of repetition, which effectively put the mind on the page. However, they can make the readers’ journey confusing, especially in sections which transfer into italicised third person.

Ultimately, this is forgivable, as the unnerving honesty and delicate insightfulness are what impress. For example, the way Walsh tackles issues related to new motherhood in “Young Mothers”. This section is also an example of the author’s wry humour: “Pregnant, we already wore dresses for massive two year-olds: flopping collars balancing our joke-shop bellies, strechmarked with polka dots.” She playfully compares maternity clothes to the clothes of toddlers and paints a humorous image mothers plodding around trying to make friends with other mothers at the school gates.

The tone is often to-the-point and deadpan, even when discussing emotive subjects such as adultery. Although this is a successful defiance of the expectation that women are to be emotive and sympathetic, the passivity of the character becomes frustrating and therefore the tone falls flat in places. The deliberate silence of the protagonist had me (at times) willing her to say something – anything! In the title section “Vertigo”, she states: “I do not say it; no one else saw me do it”, alluding to the invisibility she feels as an individual, only viewed in relation to her various roles.

The distance that the narrator creates between herself and her surroundings hindered me, as a reader, from becoming invested in the events. In the section “The Children’s Ward”, the narrator is waiting to hear the outcome of her child’s operation. This could have been heart-wrenching, but with descriptions such as, “He is nine years old, and he is the oldest child here”, I found myself adopting the same passive and vacant attitude as that of the narrator.

Among themes of ageing, motherhood and failed relationships, there is a deft handling of the domestic inequality between genders. In the final story “Drowning”, the narrator shows her insight into this: “For you to read your book is not to neglect the children…My choice to read my book necessarily involves the worry of the possibility of neglecting the children.” This story reaches Vertigo’s version of a catharsis, as the weight of expectation and inequality forces the protagonist to swim out to sea; away from her family and her responsibilities. In this final section the vacant, cool detachment cracks, revealing a vivid frenzy underneath.