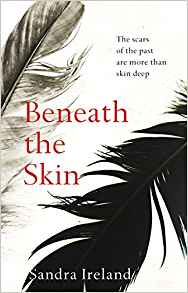 Sandra Ireland’s debut novel Beneath the Skin haunts you from the moment you first turn the opening pages. Echoes of former traumas are deeply embedded in the lives of fully realised, broken characters and ring in the reader’s ears from the first moments. In a time of clichéd explosions in soda adverts, or brutal, overt signposts of danger from Hollywood films that announce, ‘BE SCARED HERE’, Ireland treads her own path, one of subtle dangers and intangible violence that forces the reader to rescan pages, sure they must have missed something because the hairs on their arms are standing on end.

A young soldier, freshly discharged from the military after two tours of Afghanistan, finds himself at the window of a taxidermist’s shop. A sign hangs in the window reading: “Wanted: Assistant. Must be STRONG and not SQUEAMISH.” Beyond the window is Alys’s world, her life, the very essence of who she is. For Alys, that studio is her very soul – and Walt strolls right in.

Ireland’s background in studying writing shines. Her sentences are crafted with precision. Her construction of a seemingly simple story leaves the reader surprised by the amount of detail she finds space for. A complicated network of relationships are strung like fine gossamer from character to character, with Ireland the spider spinning her steel web. These relationships are at their most unsettling within the house on a street in Edinburgh. At a place most find themselves relaxed, Alys, Walt and Mouse are at their highest strung, their most deceitful.

The novel starts with Walt in an art therapy session to overcome his post-traumatic stress disorder. He is to visualize his pain and put it on a mask. He does not know how strongly this metaphor – had he heeded it – might have guided him through the complicated lives of the novel’s two sisters and their youngest relation, William. It is in the description of post-traumatic stress disorder that Ireland’s greatest achievement lies. Writing about the condition is a great responsibility to bear,  as it manifests differently from person to person, soldier to soldier. But Ireland does it with the same great care and attention she affords her sentences. Vivid images of bloodstained sand and whirring engines of mechanized vehicles disappear easily into cracked ceilings of cold town houses: “Breathing hard he counted the cracks around the light fitting. His mouth was dry. He was afraid to swallow in case he tasted blood again”. The trauma of Walt’s war experiences is as tangible as the danger present through the window that only Alys knows what lurks behind. The horror, the creepiness, the unnatural feeling of “other” is something so vague that the reader constantly doubts themselves; thinking, “are they mad? Or am I?”.

At the heart of the novel, suggested from every word, is death. Ireland uses it as flippantly as one might expect as an electrician would a light switch (they ‘flip’ it, geddit?) which makes for some morose reading, and some illicit feelings of distaste especially in relation to Alys. But there’s a power there too, one as subtle as the rest of her prose. In a world of Game of Thrones’ style deaths on television and Grand Theft Auto style violence in video games, Ireland reminds us of what death truly is, and what it can be if we let it – a transformation from one thing to another. And she, too, reminds us not to judge those we don’t understand. They may just be hiding horrors in the cupboard.