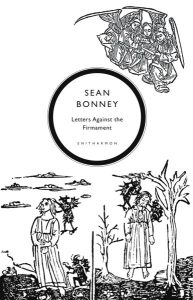 “The poetic moans of this century have been, for the most part, a banal patina of snobbery, vanity and sophistry: we’re in need of a new prosody[…]”

(“Letter on Riots and Doubt”)

If, like me, you spend too much of your free time skulking around the darker, meme-ier corners of YouTube, you may have encountered a playlist entitled “important videos”. A mesmerising series of 310 short clips – a pratfall, a snooker trick shot, an out-of-context Z-movie scene, the Seinfeld theme overlaid with Hollaback Girl, another pratfall – it presents an instance of a compilation that, whilst absorbing at first, ends up, if too long is spent in its presence, a whirl of bewilderment, and somewhat less than the sum of its mishmash of parts.

Thus, too, go many areas of Letters Against the Firmament, the eleventh collection from English-born, German-residing poet Sean Bonney. The “firmament” is definitely misleading, as he is clearly more concerned with the earthly, earthy, dirty matters of politics. In particular, he raises a polemic, apoplectic voice against the Tories, the bourgeoisie, and figures of authority in general; “I’d like to write a poem that’s also usable as a slogan”, he states in a 2012 interview.

Most of the pieces are presented as, yes, letters – on subjects from “Riots and Doubt” to “Harmony and Sacrifice” to “Poetics” itself – though there is never an established recipient to whom they may be addressed, beyond the reader of course. One piece is titled “The Kidnap and Murder of David Cameron”; another contains the wryly delightful sentiment “I take the fact that Iain Duncan Smith continues to be alive as a personal insult”; another invokes the phrase “fuck the police” nineteen times.

Bonney makes no apologies for the subjectivity of his authorship, self-referencing as “a stereotypical amalgam of unwork, sarcasm, hunger and a spiteful radius of pure fear” (“Letter on Work and Harmony”). Other than more well-known Conservatives – Theresa May and George Osborne, too, get a nod – he revels in namedropping notorious anarchists such as Carlo Giuliani, and civil rights poets and essayists like Amiri Baraka and Aimé Cesaire.

The thread of other pages – I hesitate to use any term as smooth as rhythm or flow of it – snags, snaps, zigzags between metaphors. He makes playful use of italics, small caps, tabs, and justification to explore the physical page too, in its limitations and its opportunities. Often they are short, punchy bullet holes of sentences, lines of single words, verses of single lines.

In his Acknowledgements, Bonney explains his method in certain parts as akin to the folk tradition of “a ‘cuckoo song’, where the singer will intersperse their own lyrics alongside whatever fragments of other songs happen to come to mind, thus creating a tapestry or collage in which the ‘lyric I’ loses its privatised being, and instead becomes a collective…” A success in collecting and re-employing others’ words it may be, but such rapid changes of direction mean it seldom goes anywhere. An example within “From Happiness”:

& us, locked ou. the alphabet was, ultimately, not ours
in any case, its mythological shells, its crumpled octaves &
spectra, zilch / the conversation a hierarchy of

eclipse (as in a universe, infinitely compressed)

our desires lack density & social flame
‘our silence is powerful’
‘the voices you strangle today’[.]

Images come flying out like shrapnel, more like mood-boards of words than anything with a defining structure; even the prose poems mesh conceits together, as though reassembled from a paper shredder. Individual lines are superbly evocative – “You feel like you’ve just been injected with 300mg of burning dog”, say, or “every day we are eaten, bones and all, only to be re-formed in our sleep, and the next day the same process happens all over again”. But the whole gets tiresome after a while with its “channel-hopping” style, concrete nouns and pop culture references left static in semi-sentences like museum pieces, not active, not doing in any sense. Not for me, in short.