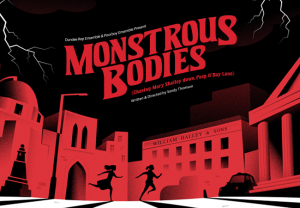 This Dundee Rep and Poorboy co-production has genuine ambition that is apparent from the moment you first read the advertising for the play to the final bow of the necessarily extensive cast. That is not stated in a way that is intended to condescend. It is meant as a compliment in that they are trying something  interesting and worthy of consideration both artistically and socially. The production almost succeeds in making it great as well. Almost. They have however come up with something good that, with a little more development, would add up to much more than the sum of the play’s parts. That is to be sincerely applauded.

The production combines two stories that are over two hundred years apart and, in intertwining them on the same stage, seek to highlight social issues from two very different times but which remain startlingly relevant. Equality, bullying, class struggle and the insidious contemporary blight of misused social media are examined in depth. The two era’s are linked through the modern character Roxanne who is undertaking study into the life of Mary Wollstonecraft Godwin, her 19th century counterpart for the purposes of the play, who would go on to become Mary Shelley the author of Frankenstein.

The stories parallel as we see some of the inspiration for the tale of Frankenstein play out through Roxanne’s research into Mary Shelley. Alongside this Roxanne is trying to reconcile herself with how to deal with her own upheavals in the present. 1812 to 2016 transitions seamlessly and in a way that the audience would quite easily follow; in between we have ensemble dance interludes which are entertaining. The extended slow-motion scene in particular provide comedy that is congruous to the overall piece. In contrast, at one point when we are almost in darkness, with only enough offset faint light to show up the slight silhouettes of dancers creeping around, there is a brooding sense that something more is coming. Backed by the use of  white noise in the sound design, I was put in mind of the imagination awakening in a sinister way. If anything, this could have been pushed further as it is very suggestive of the awakening of Shelley’s imagination, which would lead to her genre defining novel.

The contrast between the historical scenes and the modern day turns were very enjoyable. For me, the nineteenth century material was much more meaningful, serious and well-written. Perhaps the writers were looking for contrast; yet the modern day issues dealt with, whilst serious for the contemporary protagonist, seemed trivial compared with the life and death struggle depicted in 1812. Both situations however conveyed the times depicted very well.

The two leads, Eilidh McCormick as Mary Shelley and Rebekah Lumsden playing Roxanne, were the standout performances. Special mention should go to Liberty, played by Elaine Stirrat, a character that breaks the fourth wall, interacting with the audience prior to the start and at the interval. This provides us with access to the piece that was less conventional and again, if anything, should have been explored more.

Initially the production seemed like two different plays, with dance interludes parachuted in, and from this perspective Monstrous Bodies might be said to have a structural flaw. But this production requires that you draw parallels between the two scenarios presented and works hard to do so, deftly avoiding becoming ensnared a trap seemingly of its own making.

To paraphrase Mary Shelley: Beware, this play is fearless and will require you to have an open mind.