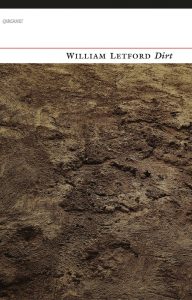 Temples and monuments reach for
transcendence, beauty lies in the
carcass of an insect, cities within cities,
take your eyes from the heavens,
look long and deep.

These words greet us at the collection’s beginning, encapsulating beautifully the essence of William Letford’s Dirt. In the eyes of many, skywards is not necessarily paired with insects and the urban, beauty; but Letford urges us away from such an attitude, focusing instead on what lies beneath these conventional bounds of heavenly paradise, because maybe, just maybe, beauty can be found in the everyday. Winner of the Scottish Book Trust’s New Writers’ Award, Letford – who previously published the poetry collection Bevel – demonstrates his ability to captivate and amaze with poetry that is both gritty and remarkably tender.

A world otherwise cast aside is shown love in this collection, and in “the crack”, Letford makes the mundane beautiful. Structurally, the poem is a physical demonstration of this love, for it appears as a heart, but the close attention Letford pays to everyday life manifests itself in the poem’s descriptive quality:

the crack of a bone the moon and the tide that
brings its song forests of cellos gardens of violins
the silent flap of a worm in mud the groan of bamboo[.]

The poem is not punctuated, rather, it is a seamless flow of words, allowing for the lines between “gardens of violins” and “public toilets”, lyrical and blunt, to blur, until both are equally poetic, with the sounds from such portrayed as a “symphony”.

Throughout, Letford engages in exciting experimentation with structure. In “algae”, we are told that if we “rip open the word rain” we will “find that beaded curtain”; indeed – on the adjacent page, we find the word rain torn apart and scattered over the page in a mesmerising sequence, to create the image of rain itself. “The insistent whistle” forces one to physically turn the book on its side, the new angle suggesting that sometimes we must change the way we look at things in order to realise their magnificence. Indeed, the poem is imaginative – i’s and l’s become towering skyscrapers, as Letford brings to life a vivid scene of a train passing through in the night.

Characters in Dirt are wonderfully eccentric, yet startlingly real. “Monuments of the mind” presents us with the speaker’s father and grandfather:

Three men sit at the kitchen table. My grandfather
smokes Golden Virginia. Making a roll-up
has become his ritual. His fingers help him think.
So that’s what he does. He teases tobacco from his tin.
My father smokes Silk Cut and has a certain way of holding a cigarette.

In describing small, otherwise trivial characteristics that are so often overlooked, Letford breathes life into these people in portraits that are full of heart and a celebration of the ordinary.

The collection is rich with experiences of travel, all of which are likely to have been influenced by Letford’s six-month journey through India. A fitting example of such comes from “The grace”, in which an observation is made of a fellow traveller:

We met drinking sweet masala chai in a dirty cafe.
His wife had bought him a ticket to travel the world
for his seventy-fifth birthday. His possessions were
stripped to the essential. He carried a backpack and a suntan.

But whilst Letford takes us to distant locations, he also provides experiences from home in Scotland:

Whether in Scotland or India, Letford’s realities, while far from exuberant, are nonetheless refreshing. Remarkably down-to-earth, Dirt brings this phrase to life by digging beyond the surface and embracing life for what it is. Steeped in imaginative poetry, the collection is a worthy read.