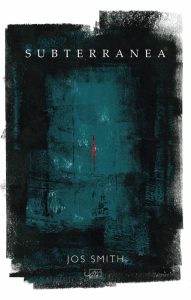 Jos Smith’s Subterranea is a poetry collection of vivid illustrations for searching imaginations. The poems explore and expand, the intimate space between internal and external landscapes. While it often focuses on specific settings, the collection in its entirety is about the pilgrimage from one reality to another.

The Merriam-Webster Dictionary defines the “Subterranean” as both something “being, lying, or operating under the surface of the earth” and a network “existing or working in secret.” Keeping in mind these definitions, Smith begins the collection by prising apart the sub-structure of emotion and earth. Alternating between lines, “Leaving” separates the surface of memories with an underpinning, nature-focused phraseology. The poem reads:

as memory begins its affections work
in one final chapter of fragile form, held.

“Cothelstone” is about a hill “beneath the hill,” underneath “another hill,” above “an inner hill,” where “a bigger one / shoots up though its own dark earth to the sky’s upturned deafness.” Here,  readers uncover “The Edge Of Magic,” where memories are “under some loose enchantment” of natural beauty.

“Stugged,” a Scottish word to describe a flat stone surface with uniformly spaced indentations, encompasses a euphoric state of the mind when the senses connect with both the subconscious and conscious, telling a story about how a soldier finds comfort through nature. “A Whole Herd Of Bodies With Round Lashes,” in truth, epitomizes the collection:

A poem that begins the way only the meek can lead
but drags behind it the whole of human language.

Here is a poem that balances “passions mysterious, even to itself.” Subterranea is a journey, “a slow searching inquiry” into nature’s language.

“Scapula” is one poem compiled of “Gust” and “Lull.” “A Plume of Smoke” connects a series of poems including “Herbivore,” “Fiat,” and “The Smell Was The First Thing.”All of these poems combine to  discuss Smith’s reflection on the 1967 maritime disaster of oil spilling over one hundred thousand tonnes off the coast of Cornwall. “Landscape Interrupted” deserves special mention. The poem is a hauntingly beautiful tale about a personified deer who is overwhelmed with “mutation rates,” “biological hazards,” and “economic development.” And yet, in moments where “she nearly bolts,” she stays, finding warmth beside a large number of power plants, aware of the growing flowers. In response to a Wordsworth quotation, Smith wrote “Pitching Under Hay Bluff.” The first three stanzas begin with “Four miles to go at the end of the day is.” The first stanza describes an arduous journey “over pocked and puddled upland heath / in an ice-flecked wind.” The second reads similarly. It is a struggle with “toe-stub rhythms in the gazed and helpless weight of the head.” In the third, things start to look up for the weary travelers. Wandering, the journey of a day becomes a “ludicrous / knackered euphoria.”

Near the collection’s close, there is a particularly beautiful poem “Title,” the story of “a boy and a girl playing.” In italics, the children talk to each other:

Count these ones. Look at this, come
to the edge, no, wait, go round it;
climb over, push here; no, try again,
lift from the legs; wait, stay where you are: Look up.

And with the two words, Smith questions us: “Where will you find a place for this in your life?” A place for exploring, a time for wandering. It is here, in this Subterranea, with “your closed eyes” and “bare skin,” where “paralysed thoughts [swim] out beyond their depth” that you might find moments of relief. Jos Smith has succeeded in composing a collection that connects poetic form with both stoic and sensual descriptions of human emotions and nature.