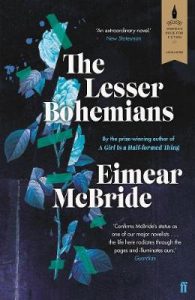 You may not like this book at first. I didn’t. The prose is ungrammatical and sometimes incomprehensible.  For instance:  “he at wall.  I the edge.  Back to.  Sheet damp.”

But be patient, for these are thoughts, and thoughts don’t care about grammar. They often omit words and leave gaps, and simply splash images and emotions on the page.  The words themselves sometimes grow small, as darker and less confident thoughts emerge.  The private thoughts seemingly intended only for you, not for general consumption.  Nick’s where else would I be?  And I long for us lying on Hampstead Heath.

The only place which allows conventional prose is the dialogue, but even then McBride has removed speech marks and indentations so the speech is imbedded in dense paragraphs, sometimes two pages long.  The reader has to work to get a sense of what is happening, and who is saying what.  But like listening to a foreigner trying to speak English, it gets easier as you go along.

And once you get the hang of the narrative voice, what is the book about?  A young Irish girl arrives in London determined to lose her virginity, and does – experiencing joy and pain in equal measure.  From start to end, we are immersed in the physical details of attraction, arousal, and of course, the act itself, with all the attendant potential for absurdity. But McBride somehow sidesteps that possibility, while still giving full exposure to the initial clumsiness, insecurities, and absence of enjoyment. This is followed by a narcotic-like addiction to pleasure – which is nonetheless still part of her naivety.

So, this is a book about the ways we think and the ways which sex affects us and informs who we are?  Yes, very competently so, but it is also about something much bigger than all these things:  love.  Especially the love which seems to arrive despite un-lovely behaviour, into hearts which have been damaged by those most trusted of people in childhood – the grown-ups.

If I had to find fault, it would be the unlikeliness of the ending – because credible endings are important, and to my mind this one is not. And actually, the premise – pretty girl loses her virginity to a famous and handsome actor, who falls in love with her too – is also very unlikely. The truth about almost every girl’s first experience of sex is much more mundane and disillusioning, usually involving a lot of fumbling and pimples – not to mention shame and embarrassment. If McBride’s heroine had more closely reflected this typical deflowering, or if indeed, the heroine had been less beautiful and young, the hero less perfectly flawed, the story would have been more poignant.  McBride’s novel is essentially a tale of sex and power, with the woman eventually winning.  The descriptions of sex are often ones of innocence being brutally ripped away, and a young heart cruelly tormented. The hero here is a man who the heroine (and the reader) is expected to forgive, because of childhood trauma.

In other words, it’s worth remembering that even a writer of McBride’s calibre (she won the Goldsmith’s Prize and the Bailey’s Prize for A Girl is a Half-Formed Thing), will not be everyone’s cup of tea.  But I heartily recommend the journey anyway, for McBride is a master storyteller, and this book adds something important to our understanding of human sexuality and love.