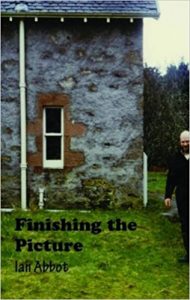 This is the work of a life cut short. Ian Abbot died in a 1989 road accident, the year after his debut collection Avoiding the Gods was published. He was only 42. Finishing the Picture, in the words of editor Richie McCaffery, is an attempt to secure the reputation of a poet whose work has, in the intervening years, been hard to access.

The collection combines the full text of Avoiding the Gods, with a further 67 poems which were published in magazines during Abbot’s lifetime or posthumously, some unpublished and finally, a few in draft form.

Abbot grew up in Perth and moved to Whitebridge near Inverness in his late twenties. The mountains, weather and wildlife absorbed him and provided him with a rich source of themes, and also a political consciousness that is evident in his constant interrogation of his relationship with the landscape. In his lifetime he received adverse criticism for the darkness of his work, full of recurrent imagery of death, decay and the struggles of nature in the face of the slick, murderous mechanisms of humankind. But humour is there in surprising places, disconcertingly playful and self-deprecatory. In “Tick” the poet likens himself to this tiny parasite, gorging for inspiration on the body of the world until full to bursting:

You crawl off somewhere quiet, start
to digest what you’ve ingested, Then suddenly,
all at once, the poem comes.

And you’re back to square one[.]

Abbot was much exercised by the challenges and processes of writing. In “A cancelled poetry lesson” he builds a troubling, sweaty metaphor of oppressive weather, which forces his words into hiding:

On other days I might have sent
my wicked, private terriers tunnelling
to flush them out, and rip them to the surface

but now they also languish in their kennels,
ill at ease and shaking with uncertainty[.]

Often the structure of his work emerges from a quite extraordinary sense of beat. The steady tick of time in “A vanished poet’s house”, for instance, or the slow, burning-cold drawing-in of a breath in each stanza of “The magi in solitude.” On the page his work is unmetered, in stanzas of irregular length, but in “An educated rabbit’s view of the snare,” – one of many on the theme of hunter and hunted – his use of diminishing stanzas is shockingly effective, forcing the reader to focus uncomfortably close as the deadly loop of wire tightens.

Ian Abbot learnt to be a countryman, and Finishing the Picture is the work of an accomplished, lyrical poet who recognised the fault-line between beauty and reality in his environment: on the hills the “sea of mica lights” is submerged in mist, the red deer have an unequal relationship with humans, the dereliction and legacy of the Highland Clearances still scar the land, There are few poems in this collection which speak of unalloyed pleasure.  An exception is “Chalybeate spring”, where he writes of the sheer noise and rumbustiousness at the end of a glorious day on the hill:

Brawling choirs of stags
were roaring out their fevers and their lusts
as I strode downwards in the gathering dark.

Speculating on how a poet’s work might have developed is a risky business.  But we are fortunate to have such a consistently elegant, sustaining and varied body of work by a writer of great maturity. There are love poems here, a pair of companion bloody pieces on Cortes and Montezuma with the dark, fierce quality of myth, the language saturated with colour and sound. Abbot drew much of his imagery from the natural world yet he was not a nature poet. His concerns were human and personal, expressing in “Ariel” our desire to be creatures of the air, but realising that our souls are “fastened to the iron in the earth.”