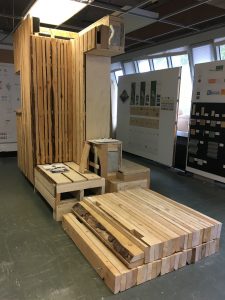 An invitation into the spaces of the sixth-floor architecture studios in DJCAD allows us to re-imagine the urban forms that shape our cities. The final year students in both the MArch and the MArch + Urban Planning programmes have put together a brilliant show structured around four research projects around Scotland. These students take us to Arbroath, the Knoydart peninsula, the region between Glasgow and Edinburgh along the M8 motorway, and right here to Dundee with their creative proposals. They have a clear idea of what they envision for 21st century Scotland.

In Architecture + Society, we get to visualize a new way of seeing the city through history. We can see how the features that have been a part of the architectural canon for centuries can be applied to today’s context. Imagine people crowding around the model of Dundee City Centre in the middle of the room as a Dundonian shares with a visitor to the city what she recognizes. Near the Marketgait, Hayley Butter presents us with her design for a four-part loggia as a way to transform the post-commercial spaces that have grown vacant due to uncommunicative zoning and urban planning.

David McPheat shows us a new way of seeing the urban subterranean as not only inhabitable, but also recreational. Jemma McBride’s stunning re-design of the Overgate Tower, something that even the local Dundonian might forget because of its regrettable position in the city, becomes an important aspect of the skyline. Near the Dundee bus station, Siyuan Lui proposes a special place in the city to celebrate the history of graphic novels and comics of Dundee, to create a hidden comic world in the city.

Rooms + Cities next door presents the challenge of working between the big and the small in urban spaces. A word floating around the room is the “rural purgatory” which embodies that liminal space that is neither rural nor urban. Aleksandrea Dutczak, Ross Geddes, Clare Gorman, and Liam McKelvie reimagine the corridor linking Scotland’s two most populous cities, Glasgow and Edinburgh, as a large regional site for pockets of urbanism. What they propose through their research are nodes of connectivity that interlink this archipelago and address the needs of human scale design. In their survey they look to the precedents of modernist architect Corbusier and the contemporary work of Rem Koolhaas. Some could argue that their research has further connections to metabolist architecture in 1970’s Japan, or the ongoing and posthumous work of Paolo Soleri in Scottsdale, Arizona.

Around the corner in the Matthew building are two more microcosms of architecture and urban planning. Macro-Micro explores the typology of sustainable detached housing near Knoydart, Scotland. These contemporary building designs show just how busy students have been this semester, out in the field testing materials for their projects. Donald Griffiths, Lauren McNamara, and Claire Soulimen have been working in a team to test the durability of Sitka spruce for construction, and have been looking at the existing timber construction systems to show us their prototypes for sustainable and affordable housing in rural settings.

The very first MArch + Urban Planning students from four years ago join the architecture degree show this year. Urban Planning + Architecture brings their vision for a 21st century Arbroath to pen and paper. Ashleigh Muirhead and Slaveya Moneva propose a set of sites to be developed to punctuate and activate old or underutilized areas of the town.

A round of applause is in store for an amazing show and a job well done! It’s finally time to catch up on some well-deserved rest, Architecture students.