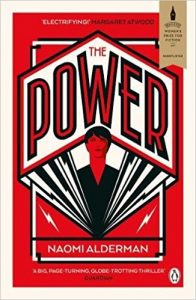 Naomi Alderman’s fourth novel, and first endeavour into speculative fiction, is based on the simple question: what might happen if women really did run the world? Set mainly in the near future, the novel is told from various points of view as first teenage girls, and then women, suddenly become aware of a whole new muscle situated in their collar bones – tentatively named a skein– that when flexed can expel huge amounts of electricity. With this as the catalyst, Alderman explores the way in which power truly affects society.

One immediate positive of this electric muscle is self-defence. Women are suddenly no longer in danger of being raped. They feel comfortable walking alone at night. The novel’s scope encompasses the impact of such a biological development on society for hundreds of years to come as more and more women realise their new- found power. They climb economic and political ladders with ease, and men suddenly find themselves feeling the creeping, insidious anxiety of being alone in a room full of the opposite sex.

Alderman’s writing is beautiful and vivid. The reader can feel the inner power these girls now hold. There is a primal and naturalistic sensation about the electricity inside these women. Tree branch-like lightning bolts sift through their hands, and here Alderman cleverly borrows imagery from female folk -lore, encompassing elements of witchcraft, mythical, Medusa- type women and good old fashioned Bible stories to create a whole new, female driven religion, all her own: ‘As it is written: ‘She cuppeth the lightening in her hand. She commandeth it to strike.’’

One of her more extreme characters, Mother Eve, begins as a young girl who uses her skein to stand up to her adoptive Father and life-long abuser, killing him. The reader can’t help but feel elated

Now, Alderman is no fool. There are good and bad aspects to this new- found power. Some women will inevitably abuse it. Men may become the victims of rape, manipulation and emotional and physical abuse. As this future escalates, the prospect of male genital mutilation rears its ugly head. So when women in power lead to a dystopia, why is this book still so inspiring? And the answer is, “Because. These. Things. Happen. To. Women. All. The. Time.”

By simply changing the power dynamic, Alderman is able to really show what it is like to live in a society dominated and controlled by one sex.

One of the more subtle and satirical ways that Alderman does his is in the book’s opening and closing chapters. The reader is shown a metafictional email from the purported author of the novel, a man from the “Men Writers Association” who is asking publishing advice from a woman named Naomi. The email is apologetic. It is self- deprecating. It is meek. This man needs this woman’s approval. The subsequent reply is kind, polite and totally condescending. At the end of the novel, this correspondence is also wrapped up, and the final line of the book, which I will not ruin for you by divulging it, is as hilarious as it is relevant. Alderman shows us that there are many different ways to discriminate ‒ not just through violence.

This book asks the tough questions about power, society and equality. There are morally good and bad women in this female dominated world, just as there are morally good and bad men in our male dominated one. Both men and women can surely appreciate the very real parallels in Naomi Alderman’s satirical study of gender roles and the world we currently live in. The Power is a very complex discussion on what equality really means in relation to an individual’s rights and also those of the collective. In the end, we all have the right to be safe, respected human beings. And the power to fight for that comes from inside of us.

(Ed – read an extract from the Baileys Women’s Prize website.)